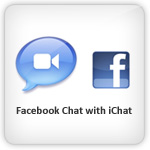 Facebook is one of the most popular social networking sites for the people to interact with their family and friends and also with strangers. The messaging game is so far dominated by Google’s GTalk and Yahoo’s Messenger and now Facebook is also trying to come up with this instant messaging for their users.

The GTalk has become the favorite instant messaging client for the people as compared to yahoo although yahoo is relatively very old. There are basically two reasons, first is that the way in which GTalk client itself is really very efficient and light. The next reason is that the protocol of GTalk is purely based on open standards after logging on to the Google’s instant messaging network there are many Google’s official client like Pidgin, Adium and the others which are available only for Windows.

For instant messaging Facebook is also similar ways to dominate and for that purpose they have recently introduced XMPP compatible gateway for their chat protocol. Meaning that now you are easily able to communicate or chat with your friends through IM client that supports XMPP and also includes friendly iChat.

You need to simply go to the Preferences menu and click on the ‘+’ button in order to add a new account to iChat and add Facebook chat to iChat.