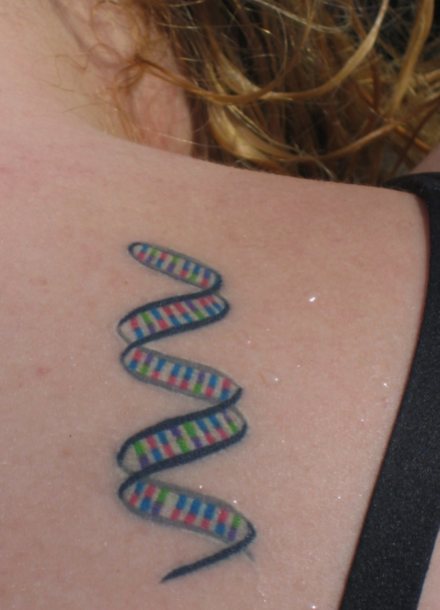 I once wondered aloud if scientists had tattoos of their science. The answer was yes, and this ever-growing collection is the evidence.

Jacylnn, a medical student, writes: “If you assign a certain color to each base, this double helix tattoo represents the first 45 nucleic acids from the first exon of p53. p53 is a transcription factor known as the “guardian of the genome.” It sends damaged cells into apoptosis and thus helps prevent cancer. I studied p53 and other targets of the SV40 tumor virus while working on a molecular biology degree at The University of Pittsburgh. I’m now a medical student at Nova Southeastern University. My husband, who is much more right-brained than I am, designed the tattoo for me.” 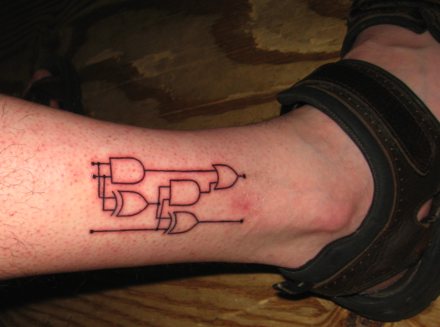 Benjamin writes, “The tattoo on my ankle is of a one-bit binary full adder. It one of the most basic building blocks of all computer chips. The flow of binary state would be from left to right as oriented in the picture.” 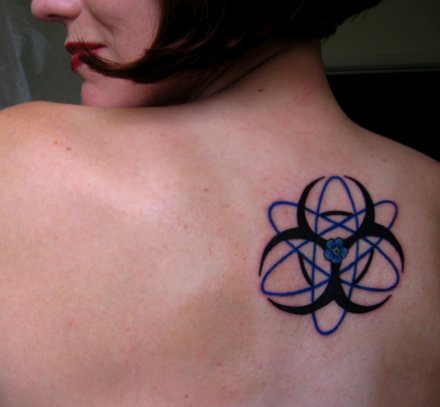 Cheri writes, “I am a huge fan of yours. I also want to share my new science tattoo, which I got because I am a biotechnologist and wanted to show my love of science….The blue atomic symbol is for science; the black biotech is for, well, biotech; and the flower is my home state’s flower, the Alaskan forget-me-not which also symbolizes life.” 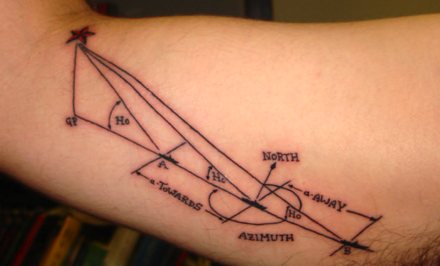 Marc Morency, Quartermaster 1st class, USN, writes: “While I am by no means a scientist, I have been fortunate enough to be paid by the government to get ships from pt. A to pt. B serving in the US Navy as a Quartermaster. I was drawn to the navigation when I joined. In my opinion, it is the only job in the military that is both a science and an art Celestial navigation has been something I have become profoundly interested in since I joined ten years ago. In this age of GPS, it is, in my opinion more important now than ever for Navigators to remain proficient in the old ways to fix a ship’s position using a sextant and trigonometry. My tattoo is the visual depiction of how to plot a line of position from a celestial body using the altitude intercept method, a method which has been time tested for more than a century. For me it serves as a reminder that while technology improves, the sea remains an unpredictable place and it is up to the older generation to teach the younger the old school ways of doing business.” 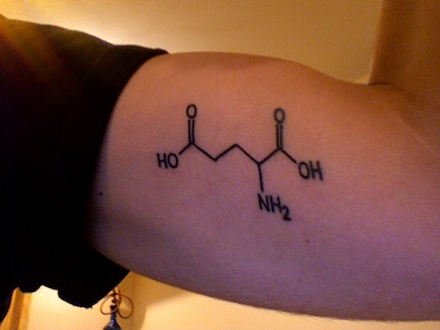 Ariel writes, “I am happy to see that other science dorks like myself have inked up our passions. This is the molecular representation of glutamic acid, the amino acid associated with the Umami flavor, the proverbial fifth taste. I am a former chef turned public health major and fell in love with the elegance of chemical compounds but never forgot my unctuous roots. 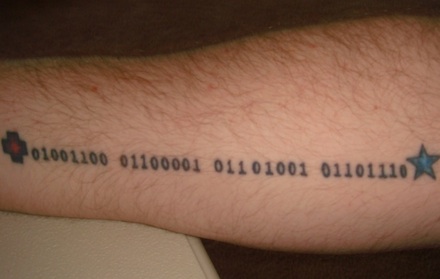 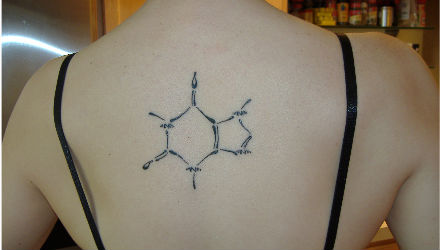 Scicurious, a blogger at Neurotopia with a PhD in physiology, writes,
The molecule is caffeine, and the tattoo itself was designed by artist Glendon Mellow of The Flying Trilobite. I got it to celebrate my PhD.
Why caffeine, you ask?
1) I had a friend once tell me that my friendship was like a hot cup of coffee. Warm, vivacious, stimulating, and comforting. It was one of the best compliments I ever received.
2) I have spent the last six years of my life studying drugs in various forms. Caffeine always spoke to me as a stimulant, because it is so different from other traditional drugs classified as stimulants. I’ve always been a little different myself.
3) I also spent the past six years studying various neurotransmitters. I will spend more years studying different neurotransmitters. Which ones I study and why will change over time, but caffeine will be with me through all of it. 🙂 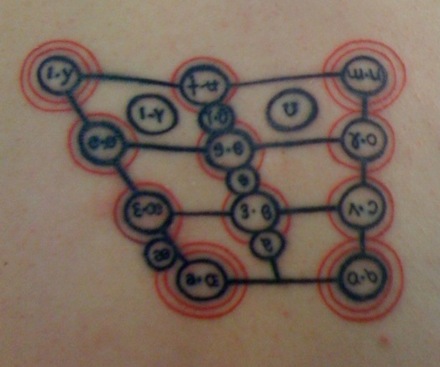 “My name is Steve Kleinedler, supervising editor for the American Heritage Dictionary, where I have worked since 1997. One of my many responsibilities is pronunciation. The tattoo is a stylized version of a phonetic vowel chart — it shows the relative position of the tongue in the mouth when those vowel sounds are articulated. I had a smaller, simpler version done on my upper back in 1993, and I’ve been wanting to get the full version for quite some time.
“The design is by Kyle Nelson of Stoltze Design and the tattoo artist was Mike Helz of Stingray Body Art.” 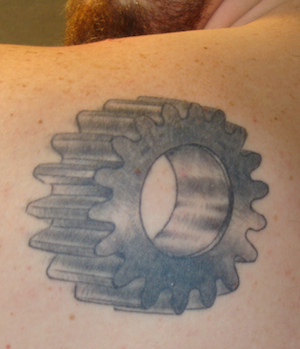 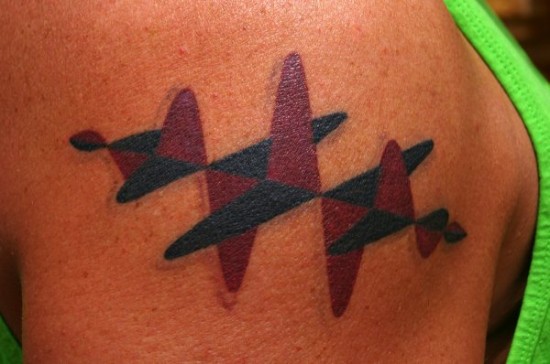 Stevens Johnson, a physics professor, writes:
After years of needling from my musician wife (who has a pair of music tattoos on her shoulders), I finally took up the challenge and wasted a large amount of time designing my own science tattoos. I greatly enjoyed the time and effort to get them just right, to reflect who I am and what I do (Prof. of Physics and Engineering).
The right shoulder tattoo [CZ: this image] is a 3D perspective abstract view of a gaussian photon, a “particle of light,” the red vertical undulations represent the electric field, the black horizontal undulations the magnetic field. It is propagating to the right, seen here as a snapshot in time. The photon is the single most common manner in which information is transmitted from one place in the universe to another. The tattoo artist suggested adding the faint shadows to give it depth, but the real reason I agreed was the ironic (oxymoronic?) humor of a particle of light casting a shadow.
The left shoulder tattoo [CZ: next image in the gallery] is a 3D perspective of the Periodic Table with the Planck Snake weaving around it (note the h-bar, Plank’s constant, in the eye). The snake represents the wave nature of matter, and Physics in general. (The infinity symbol the snake forms is a bonus.) The combination of the Periodic Table of Chemistry with the Planck Snake of Physics is also an inside joke at the expense of chemists: It took the Quantum Mechanics of Physics to explain to Chemistry its own Table of Elements.
I had no idea there were others who wear their science on their bodies until I did a web search, on a lark. Imagine my surprise. I think I’m hooked; I may not be done designing science tattoos. 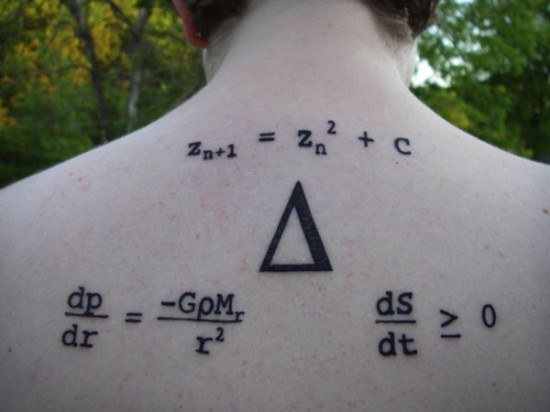 Alison, a high-school physics teacher, writes:
Like many scientists, the wonder of the natural laws of the Universe is where I draw my spiritual inspiration. I also study the religions of the world, and have been fascinated by the reoccurring theme of Creation, Preservation, and Destruction. The Mandelbrot Set (top) represents Creation, with the emergent properties of a simple equation that produces such a rich, complex, and unpredictable fractal pattern that goes on into Infinity. The equation for hydrostatic equilibrium (bottom left) represents Preservation, describing the precarious balance between crushing gravity and expanding pressure inside of stars (including our own) to keep them in a stable, sustainable size for billions of years. The equation describing entropy (bottom right) symbolizes Destruction, simply stating that this fundamental break down of systems and accumulation of disorder either increases or stays the same over time, but never decreases. All three circle around the Delta, the symbol for Change.
However, these tattoos must be done with a lot of care, else you could get one of the worst tattoos ever! 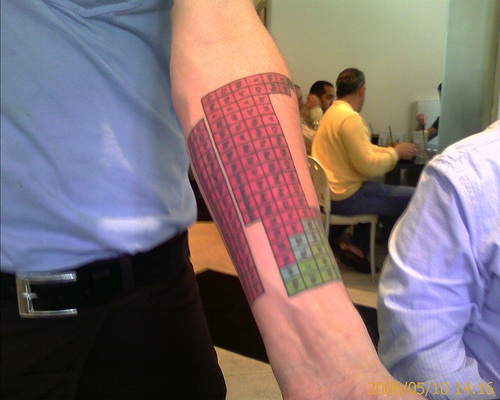 Snow Flake Under An Electron Microscope