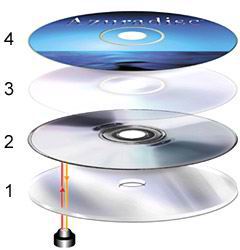 CDs consist of 99% clear polycarbonate plastic. The reflective layer, protective layer and screen print comprise the remaining 1% of the disc.

Pits and Lands are imprinted into the disc to indicate a one or a zero. A laser beam is sent from the player to the disc and the reflective layer reflects it back to the reader and the ones and zeros are translated by the player.
Recordable discs have a photosensitive dye type layer instead of the stamped information layer. This layer, when exposed to a certain light, will make an impression of a pit into the layer.

Re-recordable discs use a layer that allows the laser to polarize the photosensitive layer back and forth between a visible pit to an invisible pit.

Here is a video of how CD’s are made

How a Blu-ray is Made

Unlike current DVDs, which use a red laser to read and write data, Blu-ray uses a blue laser (which is where the format gets its name). A blue laser has a shorter wavelength (405 nanometers) than a red laser (650 nanometers). The smaller beam focuses more precisely, enabling it to read information recorded in pits that are only 0.15 microns (µm) (1 micron = 10-6 meters) long — this is more than twice as small as the pits on a DVD. Plus, Blu-ray has reduced the track pitch from 0.74 microns to 0.32 microns. The smaller pits, smaller beam and shorter track pitch together enable a single-layer Blu-ray disc to hold more than 25 GB of information — about five times the amount of information that can be stored on a DVD.

Blu-ray discs not only have more storage capacity than traditional DVDs, but they also offer a new level of interactivity. Users will be able to connect to the Internet and instantly download subtitles and other interactive movie features. With Blu-ray, you can:

Each Blu-ray disc is about the same thickness (1.2 millimeters) as a DVD. But the two types of discs store data differently. In a DVD, the data is sandwiched between two polycarbonate layers, each 0.6-mm thick. Having a polycarbonate layer on top of the data can cause a problem called birefringence, in which the substrate layer refracts the laser light into two separate beams. If the beam is split too widely, the disc cannot be read. Also, if the DVD surface is not exactly flat, and is therefore not exactly perpendicular to the beam, it can lead to a problem known as disc tilt, in which the laser beam is distorted. All of these issues lead to a very involved manufacturing process.

How a DVD is Made

These DVDs are made the same way as a CD with one additional polycarbonate layer added between the label and the pits and lands.

Double sided DVDs consist of two discs bonded back to back with the reflective layers in the middle and both sides are repairable. Double sided DVDs use a different size of micro-abrasive polishing papers to prevent the manufacturer’s label area from being removed during the repair process.

How DVDR / DVD R is made

Women Look Most Gorgeous At 31:Research

Top 10 Myths Busted By The Mythbusters

How to PrintScreen On a Macbook Running Windows