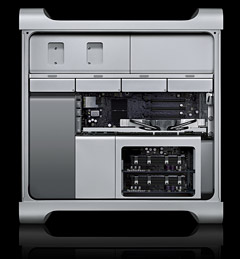 Jobs has stated that previous year was best year for Apple’s MAC. He told that almost 1.33 million MAC has been sold that represents its growth rate in industry. It also means that Apple is gaining its market value rapidly. Three quarters of shipping MACS were based on Intel and now twelve percent sales in notebook PCs.

Let’s talk on Mac Pro, another Apple manufacture contains a pair of dual core Xeon 5100 Intel processors. The processors are 2GHz, 2.66GHz or 3GHz. Moreover Schiller claims that they replace velocity engine with vector engine and this new engine is 128 bit faster than the old one. Every processor in it is having 4MB shared L2 cache and every chip is held on front side bus of 1.33 GHz.

Schiller has worked on its performance and as a result this new chip is 3 times efficient if you compare it to G5. You guys might be expecting a new enclosure in MAC Pro. Well! There is no need to add the paths that could define the previous case. Instead, the Apple Company has planned for enhancement in existing case.

Finally Apple has thrown MAC OS X seventh version that is manufactures in order to backup and to restore user data. There are few people that backup their data and most of them do it manually. This machine has ability to automatically backup your data to hard drive or server. That’ pretty much cool. What you say?