We, as humans, are known to be adrenaline junkies. Well, most of us are. We tell ourselves that the word danger is in our system, that its our middle name and what not. But the concept of skydiving, bungee jumping or any other adrenaline infused escapades that we indulge ourselves in seem like a harmless walk in the park  as compared to life in one of the places we have composed and made into a list for our dear readers. So have a look at the ten most dangerous places on earth and decide for yourselves before considering to go to any of these places for your vacations. They might end up being your last.

Russia may seem all economically sound and turning into a major super power post the Soviet war in Afghanistan, the war said to be the nail in the coffin of the Soviet republic, but the ex-Soviet state is not all clean as fresh milk as it seems to be. The politicians are not the kind of corrupt that stuffs their  pockets with enormous amounts of rubles, but instead they fill them with the names and contacts of gangsters and mob bosses. The Russian mafia runs free and the number of gangsters far exceeds that of the police with sources claiming that a Russian being assassinated every 18 minutes which adds to an average of 84 murders everyday. The center of all crime is based mostly in the Republic of Chechnya with prostitution rings, drug cartels and illegal arms trades being run by Chechen mob bosses. Foreigners are the ones mostly kidnapped along with young women as the ransom is higher and the young foreign women get more funds in exchange for their sale. From pick pocketing wallets and other pocket-able gadgetry to physical assault and murder, one wonders if communism really was the answer to Russia’s problems. Take a look at this roadside shootout. 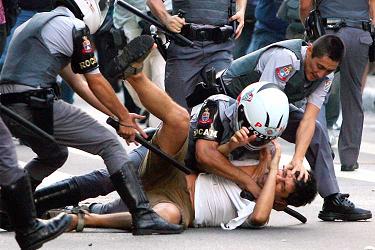 You are sitting in your living room, lounging on the couch with a brochure explaining the many festivities of Rio de Janeiro, the Carnival, the statue of Christ the Redeemer, the paragliding, the women, the beaches and wonder why you never thought about taking a trip to the fabulous city and enjoy all the fun? Why you opted for Italy instead? Well the facts don’t lie and the facts suggest that in Brazil, the question is not where or if you get robbed or mugged, the question is when. You look at one part of the city and see sprawling hotels and glitzy life and you turn your head a few degrees and your eyes open to a whole new world of slums built on the slopes of hills and cramped on top of each other with no direction of housing planning seeming to be in place. Street crime is a common part of life in some parts of Rio and Sau Paolo and people are kidnapped almost without incident while they are forced to pay their own ransoms via ATM or if not that, the families are called upon. Organized crime is a major thorn in the side of those who protect the law and a local war is waged on the police by criminal big fish. Narco-terrorism claims many civilian lives every year and if by any chance, you come out of that fire unscathed, and jump towards the water, the piranhas are waiting and yes they are as deadly as they seem. This report by AlJazeera sheds a light on the murder rate in Brazil. 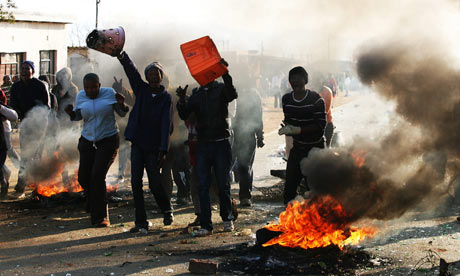 Did you know that South Africa is called the “Rape capital of the world”? Well, now you do. Although rape statistics dwindle in numbers and rise and fall each year, the fact that rape is not even considered a major physical and psychological blow by the victims and the locals alike is an appalling truth. And as if rape was not enough, the country is also consistently listed in the Top 5 list of countries with high homicide rates. Although most crime occurs in poor areas, people have started barricading their properties and armed guards are hired for protection against the growing crime rate. Farming is a major profession in South Africa, but it has become one of the most dangerous professions in the world with a murder rate of 313 per 100,000 farmers. And if that was not enough, more than ten million people are infected with HIV. This video is from four years ago, but little improvement has happened since.