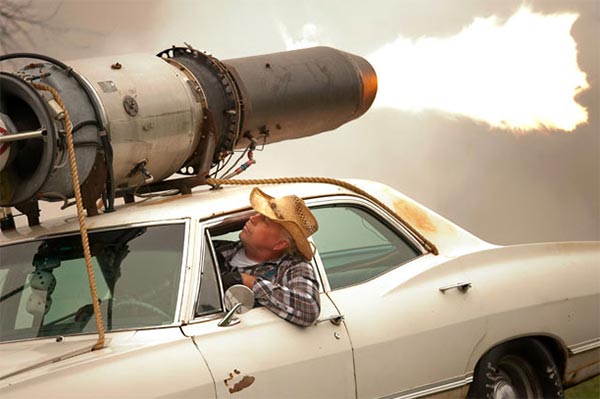 What more crazy can it be than strapping up a cruise missile on the roof of your car! I never thought people could go that insane in modifying a car. Well now we know one. Paul Stender, a 44 year old person from Indianapolis along with his wife converted their 1967 Chevrolet into a Jet powered car. Mr. Stender took help from Indy boys Inc, who are well known for making high speed cars, and along with them he created a nearly death engine for the road. The car which could barely cross 100 mph can now even cross 300 mph with the thrust of fire upto 30 feet. This is not the first time this type of experiment has been conducted, but previously such an engine crashed into mountains.

It was hard to accept the challenge says Mr. Stender, since driving below a cruise missile which can even blow up any second if something goes wrong was a big challenge for him. No matter how much it damaged the environment with its thick dense smoke, but one thing is for sure that the spectators did enjoy a lot. Here is the video below to watch this cruise car  in action.

Complete Your Comprehensive Smart Home With These 5 Brilliant Devices