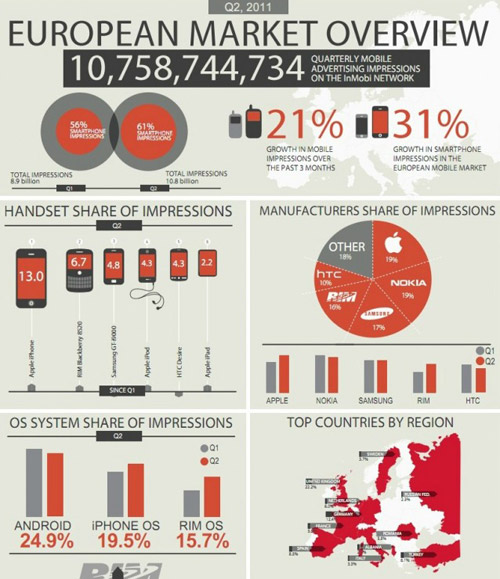 Reports have revealed this spring that the iPhone in Europe has surpassed Nokia in mobile ad traffic. Apple has managed to grow 3.3 points to reach 19.5 percent of all European ad data where Nokia lost almost a whole point to sink to 18.7 percent. The growth was helped by Nokia’s weakness in smartphones; ad hits from advanced devices grew 31 percent, where basic feature phones grew at a relatively slower 21 percent.

The iPhone’s rise was swift enough to dent Android. Google lost a hefty five points of mobile ad traffic to reach 24.9 percent and potentially within Apple’s striking distance. Even the growth of RIM was as low-end messaging phones like the BlackBerry Curve 3Gwhich helped it jump over six points to 15.7 percent.

The results of these reports don’t directly mirror market share but do reflect Apple’s particularly strong European share and Nokia’s fall from grace in what was once its safest market.

Cheap iPhone Without Contract For $350 will be available? – wait