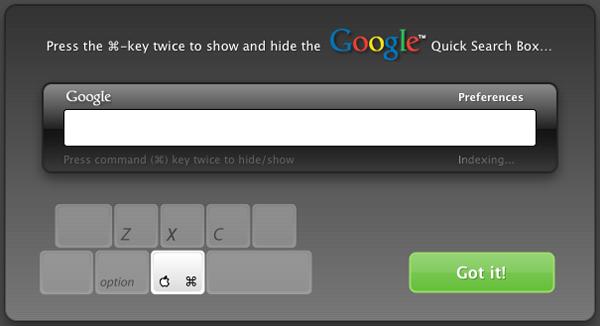 Great news for Apple MAC users! Now it’s the time for coming Google Desktop for MAC. Don’t know what how to install it? Have a look at below and see what’s present inside Google Desktop.

Google Desktop app is not installed as you installed other apps on MAC. First thing that you need for installation is Google Updater and you can call it GDesktop manager. Probably you would like to know what Updater does. Basically, it downloads code of GDesktop, opens it and then installs multiple downloaded files on different places. At the end, you will receive Google Desktop app into your MAC with various other apps.

After installation, Google Desktop works with indexing your MAC hard disk. Be patient here! It could take longer time depending on disk. When it completes, indexes files will be created and user account gets index at “~/Library/Application Support/Google/Google Desktop/Index”.

That’s it friends! After completion, Google Desktop app will show a welcome message and will introduce you with basics.

To remove any app, you do nothing but simply drag it to Trash. GDesktop app does not uninstall by this simple method. What you need to do is go to Updater and click on Uninstall button as I already told you earlier that it is not installed or removed as other apps but it’s not difficult to remember the procedure.

iPhone and Windows 7 Don’t Play Nice, No Fix in Sight

How to improve your iPhone Battery Life