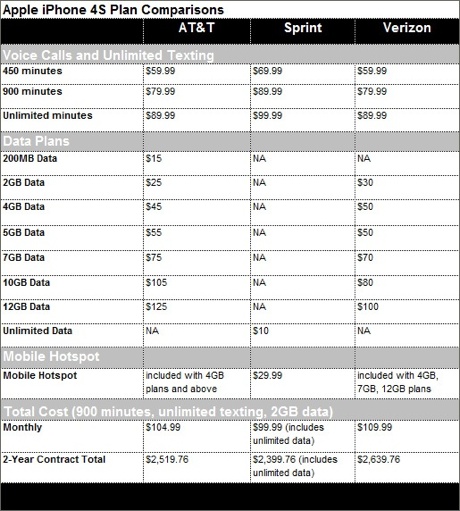 Next generation iPhone 4S developed by Apple is now available for pre-orders and you can get it from any of three Apple’s carrier partners namely AT&T, Sprint and Verizon.

So if you have decided to make pre-order for iPhone 4S but you are confused which carrier you should prefer then here you will get the correct choice. You have to consider various parameters such as networking, speed, price and ability to surf when you are on talk etc. have a look below and see how carriers are different from each other.

Sprint is charging $29.99 each month for Mobile Hotspot add-on that is available with 5GB data. Version and AT&T are providing this feature for $19.99 but it comes with 2GB of data.

Mobile Hotspot feature lets you to use iPhone 4S that provides Wi-Fi connection to more than five different devices.

AT&T is a top performer that allows 67 % faster download speed as compared to its competitors.

AT&T offers users to surf while talking on iPhone. Unfortunately Sprint and Version do not allow this functionality.