This article of ours is dedicated to the top 10 biggest construction ever made on earth by man, so here we go with the top 10 largest things;

World Waterpark is the world’s largest indoor waterpark with a size of five acres. It was made open to public in 1986. It is located in the West Edmonton Mall in Edmonton, Alberta, Canada and has a maximum capacity of 40,000 guests, an average temperature for the water of 30-33 °C (86-89 °F), and its wave pool holds 12.3 million litres. The highest slides in the park are Twister and Cyclone both are 83 feet (25 m) high. Other slides include the beginner slides, intermediate slides, advanced slides, extreme slides and decommissioned slides and also have two hot tubs. The Waterpark is also home to Center of Gravity, the world’s tallest indoor bungee jump tower, and the only one over water. Center of Gravity also has an 80 foot rockwall alongside the tower of bungee jumping. It is also the host to two bars: Piña Colada and Beachview Bar which sells out alcoholic beverages and a Coconut Grove, which sells different kinds of food such as hamburgers and French fries. Snacks can be purchased at Beachview Snacks. Hot Dog Hut also sells snacks and of course, hot dogs.

Donghai Bridge also known as East Sea Grand Bridge is the longest cross-sea bridge in the world and the longest bridge in Asia. The construction of bridge was completed on December 10, 2005. It has a total length of 32.5 kilometers (20.2 miles), connecting Shanghai and the water offshore Yangshan port in China. Most of the parts of the bridge are low-level bridge. There are cable stayed to allow large ships to travel easily. The widest span of the bridge is 420 m. 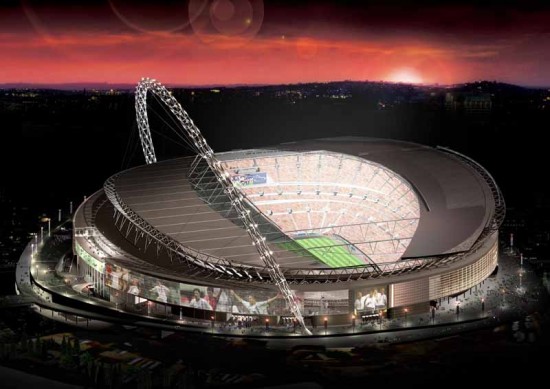 The earlier Wembley stadium, originally known as the Empire Stadium, was often referred to as “The Twin Towers”, was one of the world’s most famous football stadiums until demolished in 2003. Existing stadium is a rebuilt on the site of previous stadium and was opened in 2007. It is a football stadium located in Wembley Park, in the Borough of Brent, London, England. The construction cost of newly built stadium is$ 1.6 and has a capacity of 90,000. Foster and Partners, Populous (then HOK Sport ),  Nathaniel Lichfield and Partners (planning consultants)are the architect of stadium. The  iconic arch over the stadium, which has been totally rebuilt and is now one of the most modern and breathtaking arenas in the world. The stadium has a circumference of 1 km, 107 steps in the trophy presentation route – the old stadium had 39 steps. It encloses 4,000,000 m³ inside its walls and under its roof.  The new pitch is four metres lower than the previous pitch. Each of the two giant screens in new stadium is the size of 600 domestic television sets The total  length of the escalators is the same as a 400 metre running track.

BioBot: Make Bio Diesel for Your Car At Home