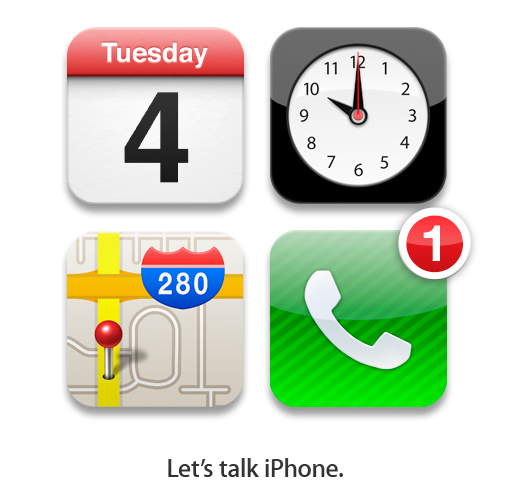 As posted recently, the invitation to Apple’s iPhone event to be held on October 4 have already been sent out. The numerology expert Helmut Weltschmertz from the Koblenz Institute of Numerology and Used Car Sales has come up with the explanation regarding what the numbers and symbols on the event’s invitation meant.

Below is what Dr. Weltschmertz was able to deduce for TUAW:

The Calendar icon — “Here, Apple is telling us that there will be “tues” (“two” in some ancient foreign tongue lost in history) devices to be announced. The number 4 is below the word Tuesday, indicating that both new iPhones are ‘raised above’ or more capable than the iPhone 4. Some might say that this is indicating the date of the event, but there’s much more to this icon than meets the eye.”

The Clock icon — “The hands of the clock are pointing at both the number 10 and the number 12. Actually, the second hand is also pointing at the number 12. Add those numbers up — 12 + 12 + 10 — and you get the number 34. This is very telling … Steve Jobs’ birth mother Joanne Simpson was remarried to George Simpson when she was 34 years old, which proves that the government is covering up everything that happened at Area 51 in 1966. But I digress. There’s a progression there. 3 … 4 … 5! Yes! The iPhone 5 will be announced!”

The Maps icon — “280 in the shield on this icon is an obvious indication that iOS 5 will be released and has 280 new or improved features. The meaning of the intersection of the yellow and orange lines is also obvious to anyone with half a brain — it means that Apple’s new products will come in two colors, orange and yellow. The red pin signifies that this icon might fall off of the web page and someone stuck a pin into it to keep that from happening.”

The Phone icon — “Ah, yes, the number 1. It can mean many things. One is the loneliest number, and its location on the upper right-hand corner of the icon has special meaning. That points to the northeast, and in the olden days of America, that’s where witches were burned — in the northeast part of the country. It is obvious to anyone that there is magic and witchcraft involved in the design of the new phones. The green pinstripes on the background portend an event where all of the Apple executives will be wearing suits. The white phone icon even has deep meaning. Note that it looks exactly like a silhouette of a fetus, which points to the birth of a new era of technology, cheap beer, and world peace.”