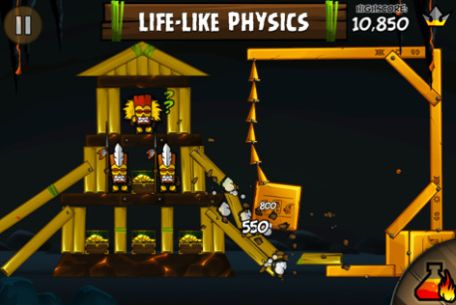 One of the interesting games that you see in iPhone is Siege Hero. This game copied the Angry Birds idea in next level. It’s quite similar to Angry Birds in which you have to throw the rocks to break the structures in order to kill the soldiers placed inside. Instead of throwing birds, here you will need to throw stones and your target should be more accurate than you do with Angry Birds.

Siego Hero is full of fun with multiple levels in it to play and you will see different characters in all stages. You will see its two versions: one is free and the other is paid. It is available in App store with the cost of $3.99. You can also try it for free from the link given as: http://itunes.apple.com/us/app/siege-hero-free/id447042779?mt=8

Music in game background is no doubt amazing to entertain you more. The game creator made it look just like Angry Birds. The reason behind this truth is “Angry Birds” is the most wanted and common used game and if another game with same concept appears, then definitely people want to try it also.

So, what are you waiting for now? Just go to App store right now and get Siege Hero for you iPhone. Enjoy!