No 3. How Rotary Engine Works 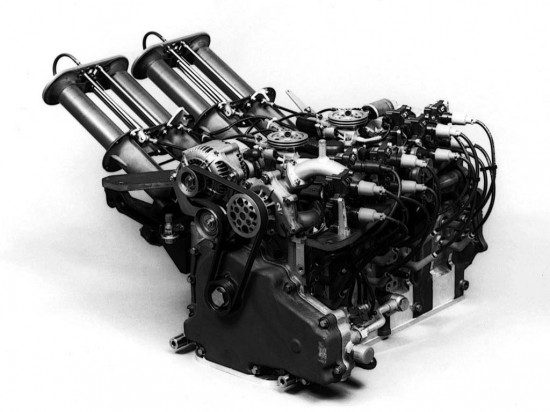 The rotary engine was an early type of internal-combustion engine, usually designed with an odd number of cylinders per row in a radial configuration, in which the crankshaft remained stationary and the entire cylinder block rotated around it. The design was used mostly in the years shortly before and during World War I to power aircraft, and also saw use in a few early motorcycles and cars.

By the early 1920s the rotary aircraft engine was becoming obsolete, mainly because of an upper ceiling to its possible output torque, which was a fundamental consequence of the way the engine worked. It was also limited by its inherent restriction on breathing capacity due to the need for the fuel/air mixture to be aspirated through the hollow crankshaft and crankcase, which directly affected its volumetric efficiency. However, at the time it was a very efficient solution to the problems of power output, weight, and reliability.

This video animation provides a basic understanding of how the Rotary Engine is put together and how it works.

No 2. How Engine Works 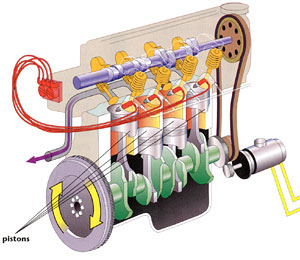 A car engine can look like a big confusing jumble of metal, tubes and wires to the uninitiated.

You might want to know what’s going on simply out of curiosity. Or perhaps you are buying a new car, and you hear things like “3.0 liter V-6” and “dual overhead cams” and “tuned port fuel injection.” What does all of that mean? Below is some explanation and some videos to help you understand the basics

Air enters the engine through the air cleaner and proceeds to the throttle plate. You control the amount of air that passes through the throttle plate and into the engine with the gas pedal. It is then distributed through a series of passages called the intake manifold, to each cylinder. At some point after the air cleaner, depending on the engine, fuel is added to the air-stream by either a fuel injection system or, in older vehicles, by the carburetor.

Once the fuel is vaporized into the air stream, the mixture is drawn into each cylinder as that cylinder begins its intake stroke. When the piston reaches the bottom of the cylinder, the intake valve closes and the piston begins moving up in the cylinder compressing the charge. When the piston reaches the top, the spark plug ignites the fuel-air mixture causing a powerful expansion of the gas, which pushes the piston back down with great force against the crankshaft, just like a bicycle rider pushing against the pedals to make the bike go.

Below is the 3D animation of a fuel injected V8

No 1. How Jet Engine Works 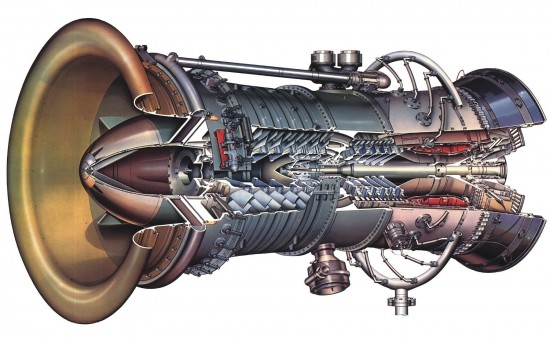 A jet engine operates on the application of Sir Isaac Newton’s third law of physics: for every action there is an equal and opposite reaction. This is called thrust. This law is demonstrated in simple terms by releasing an inflated balloon and watching the escaping air propel the balloon in the opposite direction.

All jet engines, which are also called gas turbines, work on the same principle. The engine sucks air in at the front with a fan. A compressor raises the pressure of the air. The compressor is made up of fans with many blades and attached to a shaft. The blades compress the air. The compressed air is then sprayed with fuel and an electric spark lights the mixture. The burning gases expand and blast out through the nozzle, at the back of the engine. As the jets of gas shoot backward, the engine and the aircraft are thrust forward.

The video sequence below was Broadcast on the History Channel UK Documentary Whittle the Jet Pioneer by UK Based based CGI Animation Studio Rendermedia
[youtube]http://www.youtube.com/watch?v=MUxP3PCDRTE[/youtube]

The video below shows in details how a jet engine or gas turbine works.