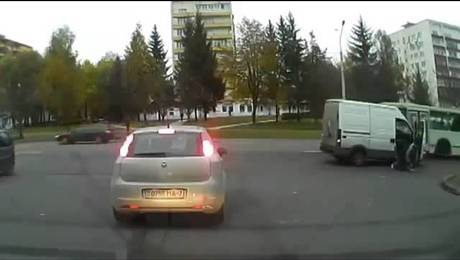 Dash Cams are very common in Russia to help cut back on crime and corruption on the road. But more often than not, drivers in Russia catch idiot drivers and passengers doing what they do best- making us roll on the floor with laughter at their antics. In this video our driver is stopped at a busy highway intersection, waiting patiently for his turn, when a white van in crossing lane pops a U-turn.

No big deal- unless done at high speed, with the door partly opened, and you fail to wear your seatbelt. The inhabitant promptly topples out of the van, brushes himself off, chats with the driver and climbs back into the passenger’s seat and rides off into the sunset. All while traffic on the busy highway continues to fly by and our cameraman, undoubtedly, sits stunned at this hilarious incident that could have been easily avoided if someone had just worn a seatbelt.

While many people wondered if this was a reflection on the ease of getting a license in Russia, it has to be countered- if dash cams were more common in the United States, we would see just as many and probably more idiotic traffic videos hitting the internet.