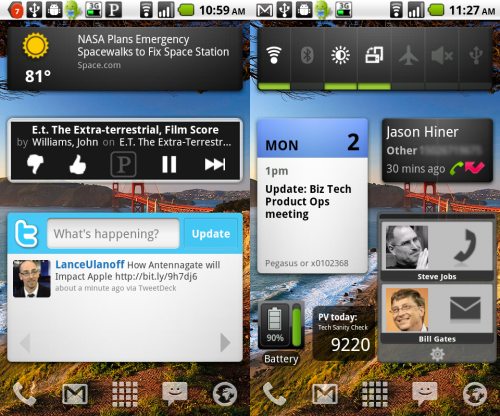 One of the most sought questions these days for smartphone enthusiasts is whether to go for Android or for iPhone? With both of the competitors gaining market shares and introducing newer and better versions rapidly, it becomes really hard to stick with a single option and hard to decide to which one to go for. Here are some comparisons which might help in deciding which one to go for.

Keeping in view the market share of the both the OS, the Apple’s iOS has 37% of the total running smartphones, US Market. Whereas Android is running on about 22% phones as compared to the iOS. But the catch here is, as predicted by many, iOS is slowly losing its control over the market share and slowly but rapidly, Android is taking over. According to some reports around 160,000 devices running Android are being sold every single day. The figures change every year, so predicting the future is not a viable option right now, but one thing is sure, Android is surely gaining edge over the other competitors. 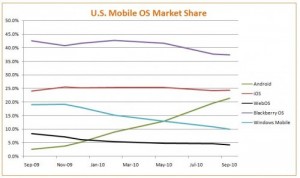 Well now coming to the user interface, one of the most important features to look for when buying a new phone. If you are someone who like their phones to a have a simple approach yet class, then going for iOS is the option for you. But on the other hand of you are a user who likes diversity then Android in definitely something you should try. As the two latest versions from both the competitors i.e. Android 2.3 also known as Gingerbread and iOS 4.2.1 are in the market, the UI offered by the two are quite the opposite. Where Apple didn’t change much in the visual department except the few bugs and like always, improving battery performance, Google’s Android 2.3 has made major changes in the UI. From status bar to the keyboard and even support for WXGA and higher screen resolutions, Android has truly outclassed iOS in here. The only plus iOS has over Android is the quality of on-screen keyboard offered by it, it has always been better. But the Android covers this minor flaw in so many other ways. Especially the notifications area, where iOS only offers a certain pop up notifications, Android has a smarter way to do it. A whole slide down status bar, which gives you every single notification from your facebook feeds to your email status. Another plus Android has over iOS is widgets, if you are familiar with how widgets work, you should know very well how easy they make your life and improve the productivity of your phone. iOS on the other hand doesn’t support widgets and all you have is an annoying home-screen with application shortcuts. Apple has tried to stick with the stock everything, there are very little chances of customizing your iPhone where as in case of Android, the possibilities are limitless. 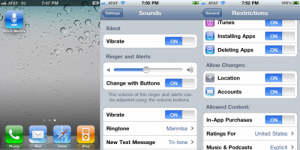 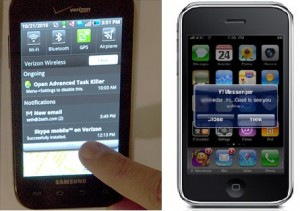 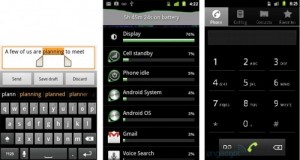 Another common trait people look for while buying a phone is that how many apps does the phone support and how many are available. Now if we look at the app stores, Apple has around 300,000 applications available as compared to 200,000 applications in android’s app store. Apple stands a clear winner in the number of apps, but the point here is how many of them are for free? Android offers around 57% of its applications ready to be downloaded free of cost where as Apple has only 28% of its total content free of cost for the users.  With the new version 2.3 coming up, the Android app store gained some really great new features whereas the Apple app store remains the same. Over the future we can predict one thing for sure, even though Apple has more apps on its side for now but with the number of increasing users in Android, it sure will gain momentum and boost up the number apps. Even now Apple surely has some of the best games and other applications, but there are aspects where Android has edged iOS out. Most of the smartphones are equipped with GPS these days and the Androids turn by turn navigation has no alternative and the voice command is another feature that iOS lacks and Android has it near perfection. Imagine dictating a complete text message or email and then sending it just by just saying ‘send’.  Then comes the wireless tethering, Android offers this feature from the day one, whereas for iOS 4.2.1, unless you jailbreak it, you can’t use this feature on it either. Keeping in mind, jail breaking is a risky procedure and you can damage your phone while doing so. Plus when it comes to web browsing, even though iOS’s default browser i.e. Safari does a pretty well job of rendering webpages but it still lacks flash support whereas Android’s default web browser gave flash support from day one. With all this and so much to come, we can’t really decide which one wins over the other in relation to the applications supported by the both. 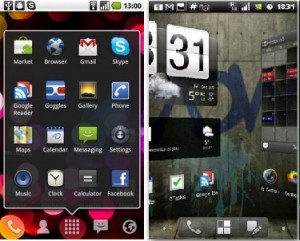 Another and most probably the most important feature that counts while buying a phone is the hardware it supports. Well when it comes to iOS 4.2.1, the only choices you are left with are the iPhones available with pretty much the same features and some hefty price tags. Whereas in Android you have quite an option, with the latest update rolling in for many devices, you can choose from Sony Ericsson’s Xperia Mini to a high end device like HTC Thunderbolt.

All in all, both the OS are designed in their own unique way and it is hard to say which one edges out the other one. We can wait and see what the end of this year might bring in for us. All I can say for now is, If you like the simplest approach and stock OS with a support for many available application then iOS is the one for you but if you are more of a user who like to customize their devices and make the most use of the open source OS available, Android is the definite choice for you.