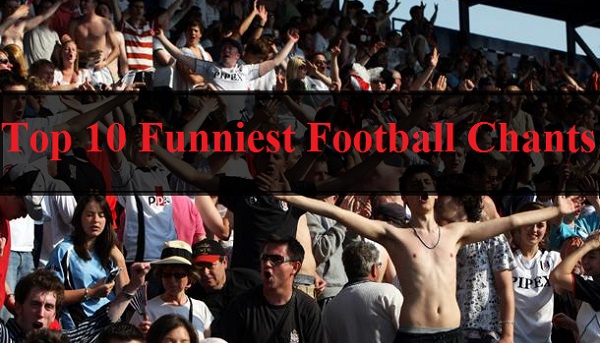 The only thing that can make you feel better when your team is once again losing a football match, is of course a hilarious chant and song being sung along with your fellow club fans to laugh away the disappointment. Either they’re hilarious, or so pathetic that they become hilarious, there have been some fantastic chants coming from the stands down the years.

Here are 10 chants sung at football matches, that I just can’t seem to stop laughing at even when just thinking about them.

As West Ham loses 6-0 to Manchester City in a Capital One Cup Semi-Final in 2014, the fans of the losing club couldn’t help but to embrace the moment that apparently comes as a recurrent event for them.

Fans of Tottenham Spurs make the best of their trip to the home of Liverpool as they lose 4-0.

While this one is more of cute than funny, it just had to be placed on the list because the crowd chants are being lead by a young boy. How cute!

West Ham fans took the opportunity to put their opposing team to shame as they take the lead on the other team home grounds.

At an Everton vs. Chelsea game that occurred in 2008, this popular Phil Neville chant was sung.

7. “What a waste of council tax, we paid for your hats”

This one was not aimed a football club but at the policemen who passed by fans of F.C. United of Manchester.

Whilst being stretchered off the field, Adebayor’s fans sung him quite a song that speaks about how his dad washes elephants and his mother is a wh*re.

Following false suggestions that were made by a newspaper that former Arsenal player Ashley Cole had a homosexual relationship with a fellow Premiership footballer, fans couldn’t help but to make a chant about it to poke a fun at Cole.

Top 10 Myths That Are Not Myths