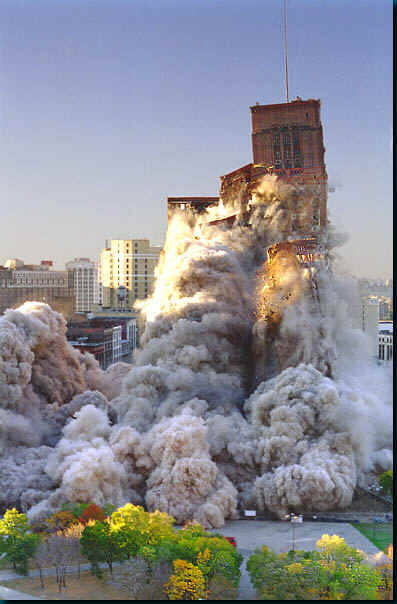 Construction and construction engineers play an important role in society. They construct beautiful structures and make the world around us beautiful. But just like fashion, buildings also go out of fashion and have to be torn down.

Large buildings, tall chimneys, smokestacks, and increasingly some smaller structures may be destroyed by building implosion using explosives. Imploding a building is very fast — the collapse itself only takes seconds — and an expert can ensure that the building falls into its own footprint, so as not to damage neighboring structures. This is essential for tall structures in dense urban areas.

Any error can be disastrous, however, and some demolitions have failed, severely damaging neighboring structures. The greatest danger is from flying debris which, when improperly prepared for, can kill onlookers.

Even more dangerous is the partial failure of an attempted implosion. When a building fails to collapse completely the structure may be unstable, tilting at a dangerous angle, and filled with un-detonated but still primed explosives, making it difficult for workers to approach safely.
A third danger comes from air overpressure that occurs during the implosion. If the sky is clear, the shock wave, a wave of energy and sound, travels upwards and disperses, but if cloud coverage is low, the shock wave can travel outwards, breaking windows or causing other damage to surrounding buildings. This is why you can’t be half right when it comes to engineering. Today we have compiled a list of Top 10 demolition/ implosion fails.

How its Supposed to be Done

Implosion of the Sheraton Hotel

An attempt was made on December 16th, 2006 to implode the East Hills High Rise in Pittsburgh. The building, once a home to the elderly poor in Pittsburgh, was to be demolished. But something went wrong

No 9. Chimney Pull Down

Chimney stack gets pulled down on a car!!

This water tower was supposed to be demolished, but only one of the three explosives ignited and the water tower was left standing. As you can hear, a large crowd gathered to see the anti-climactic event.

For those of you that thought demolishing a building was easy