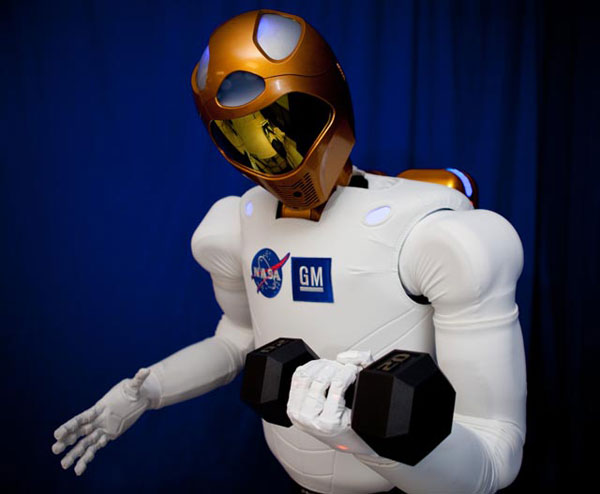 This badass looking android is Robonaut 2, a joint project of NASA and General Motors. Robonaut 2 is an evolution of Robonaut 1, who was spawned by NASA and DARPA and had an ATV for legs. R2 emulates the upper torso of a human, and is designed to work closely with humans using the same tools that humans use. GM, for its part, is interested in advanced industrial robots:

“For GM, this is about safer cars and safer plants,” said Alan Taub, GM’s vice president for global research and development. “When it comes to future vehicles, the advancements in controls, sensors and vision technology can be used to develop advanced vehicle safety systems. The partnership’s vision is to explore advanced robots working together in harmony with people, building better, higher quality vehicles in a safer, more competitive manufacturing environment.” 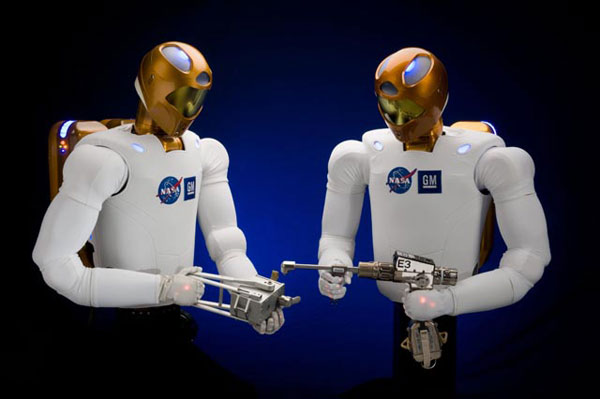 You have to wonder, though, whether creating a robot that looks and functions like a human is really the best way to do it. There already is a robot in space: Dextre. Dextre doesn’t look especially human, but he has two 3 meter long arms, each with seven offset joints, which is a couple more than we’ve got last time I counted. I understand that a robot that emulates a human in form and function will likely be more intuitive to control, but there may be some compromise when it comes to capabilities and options.

Now, I’m a huge fan of human spaceflight. I don’t think there’s any substitute for the inspiration afforded by having members of our species leave our planet. That being said, while I don’t know what the exact numbers are, I imagine that the cost and effort of sending a human into space is split something like 5% science, 95% making sure that they don’t die. This isn’t exactly the most efficient path to discovery. Of course, that 5% science may be 100% stuff that only humans can do in person, but I really do think that robots are the practical future of space exploration 95% of the time. I want humans to travel to Mars… Heck, I want to be one of them. But realistically, in the short term, I think our limited resources are better spent on intrepid robots like Spirit, Opportunity, and Cassini.

The Largest Car Recalls in History