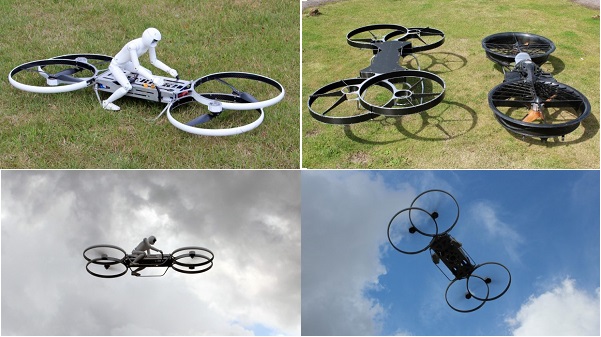 For conventional helicopter such Robinson R22; it is very difficult to reach to operational areas like survey and cattle mustering. And it is also very difficult to place these types of helicopters in complex areas. That is why Hoverbike has combined the concept of motorbike and helicopter to make the flying motorcycle.

It flies like a quadcopter. It is very rugged and cheap as compared to helicopter. It also requires very less on-going maintenance. In addition with quadcopter, there is a 1/3rd scale drone. The quadcopter drone is 3D printed which has an anthropomorphic figure and they are calling it Cyborg Buster. This drone is safe and versatile. It is coupled with 3DR Pixhawk flight controller which will allow it follow pre-determined flight path and return to home.

Three different types of the hoverbike are into the picture. One of them is the original design which is having two motors and manned version. Second of them is quadcopter drone. And the last one is the 2nd prototype of the Hoverbike on which the designers are still working on.

Dual rotor was having a stability problem due to which the team decided to go with the quad rotor. The quadcopter design provides required thrust which gives it stability. The original design of Hoverbike was very eye catchy but due to certain problems in practicality work it has been replaced.

This bag is rugged which is being designed as a carry case for their 1/3 scale Hoverbike.  This bag can also be used as a rucksack and carrying sports equipment or as a travel bag

A UK company ‘Malloy Aeronautics’ is working on this and they have launched the project on Kickstarter to raise funds. The goal has been completed very quickly due to its details that how it can be very useful for the future.

Check Out This Video: