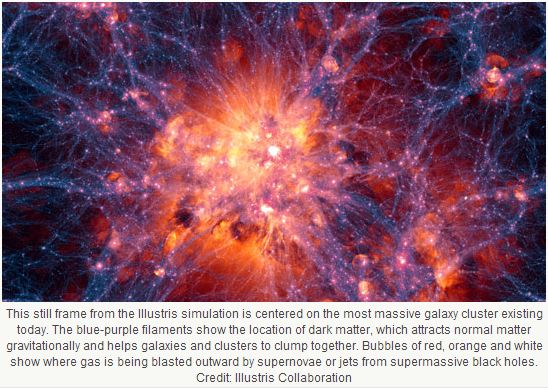 Using a computer simulation called the Illustris, scientists have created the first realistic virtual universe that dates back 12 million years after the big bang theory and spans 13 billion years of cosmic evolution.

“Until now, no single simulation was able to reproduce the universe on both large and small scales simultaneously” says lead author Mark Vogelsberger (MIT/Harvard-Smithsonian Centre for Astrophysics), who conducted the work in collaboration with researchers at several institutions, including the Heidelberg Institute for Theoretical Studies in Germany.

The team dedicated more than five years to developing the Illustris program with the actual calculations consuming 3 months of “run time” and using a total of 8,000 CPUs in parallel. The average desktop computer would take approximately 2000 years to complete such verbose calculations.

The calculations start 12 million years prior to the big bang theory and transition to the present day period. During that time astronomers counted more than 41,ooo galaxies. Importantly, Illustris yielded a  mixture of spiral galaxies similar to the Milky Way and football shaped galaxies. It also recreated large galaxy structures like galaxy clusters and the bubbles & voids of the cosmic web. On the small scale it accurately imitated the chemistries of individual galaxies.

Since light travels at a fixed speed, the farther astronomers look the more they can see in time. A galaxy one billion light years away is viewed as it was one billion years ago. Telescopes such as the Hubble benefit us by allowing us to explore greater distances, however it is not able to follow the evolution of a single galaxy over a period of time.

“Illustris is like a time machine. We can go forward and backward in time. We can pause the simulation and zoom into a single galaxy or galaxy cluster to see what’s really going on” says co-author Shy Genel of the CfA. 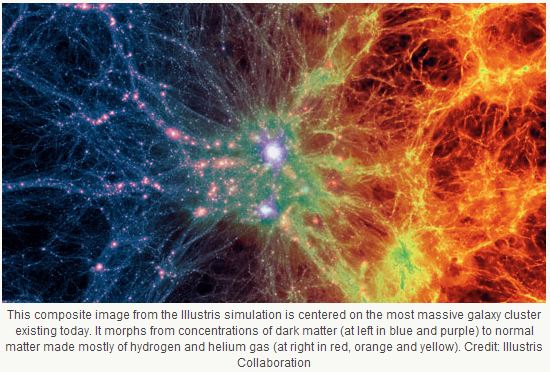 Located in Cambridge, Massachusetts, the Harvard-Smithsonian Centre for Astrophysics (CFA) is a joint collaboration between the Smithsonian Astrophysical Observatory and the Harvard College Observatory. CFA scientists organized into six research divisions, study the origin, the evolution and ultimate fate of the universe.

Can Handsome People Get Away With Anything? All Eyes On The Mugshot That Broke The Internet.

Celebrites You May Not Know Were Related