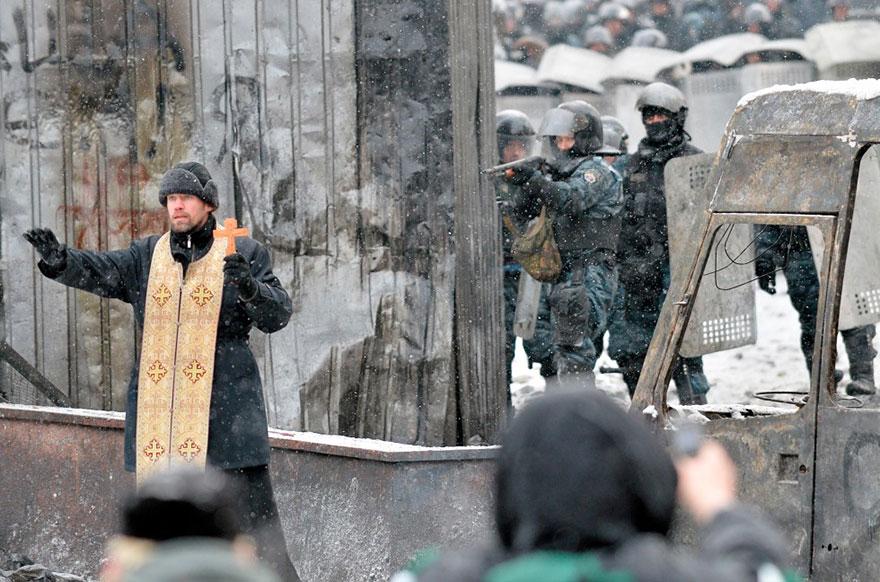 People all over the world are demonstrating these days, mostly against their governments and leaders.  Most of these conflicts are often captured on camera, and the violence, the blood and the killings could easily make you believe there is no hope for a future for man.  Every once in a while, a momentous hopeful moment is recorded in an image and they prove that despite all that is going on, there are people who strive to change the world and put their lives at risk to offer peace to the other side.

It doesn’t matter what your political standing is, I am certain you preach peace.  Whenever there are protests, it is often the innocent that get hurt the most.  These people are hurt because the find themselves in the line of fire or they lose their young men and women who are known to be the most active in violent protests.  While this story is an over-simplification of the current complexity of conflicts, it serves to remind us that the smallest gesture of love often leaves the greatest impact.  Share this love today.

A woman kisses an anti-protest policeman while protesting against Mubarak’s government.  After weeks of protests, violence and killings, over 2 million protesters occupied Tahrir square, triggering clashes with police that caused the loss of 846 lives.  The government was ousted and the president resigned shortly after. (image: msnbcmedia.msn.com) 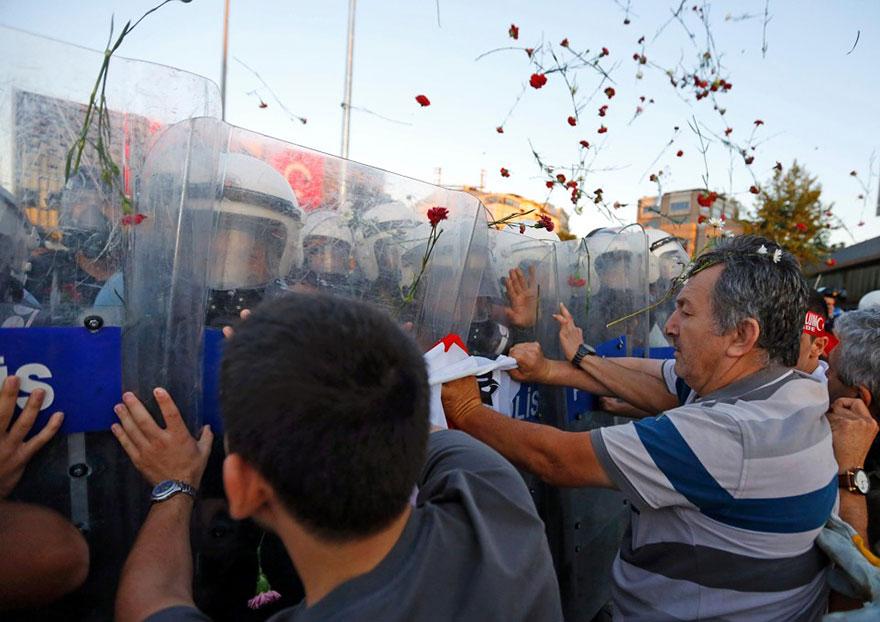 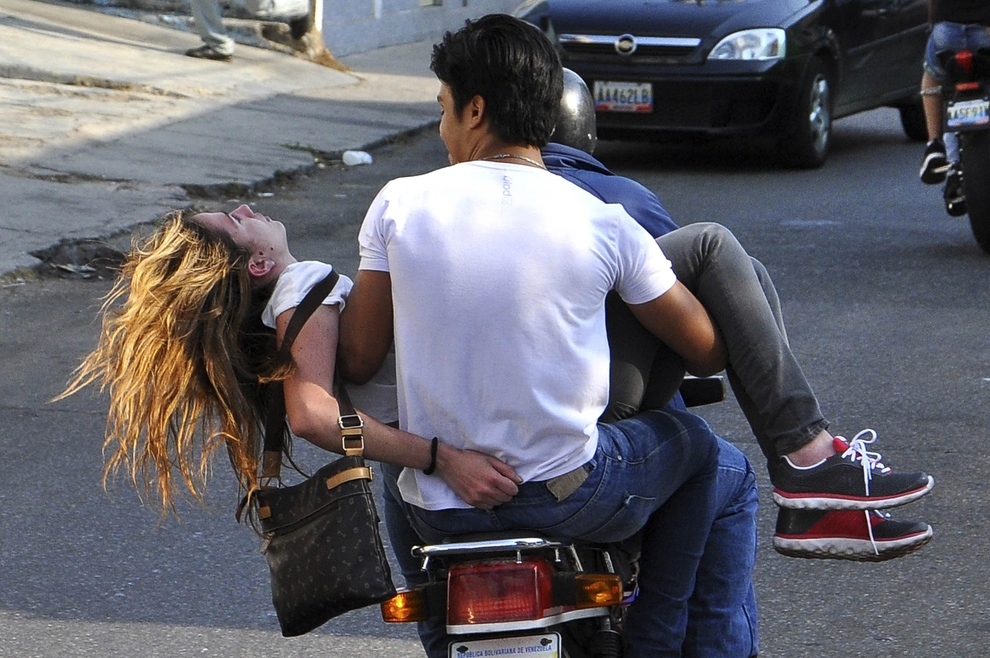 Volunteers evacuate opposition supporter Genesis Carmona from the protest street after she was shot in the head during a protest against the government.  She later died from the injury. (Image: nydailynews.com) 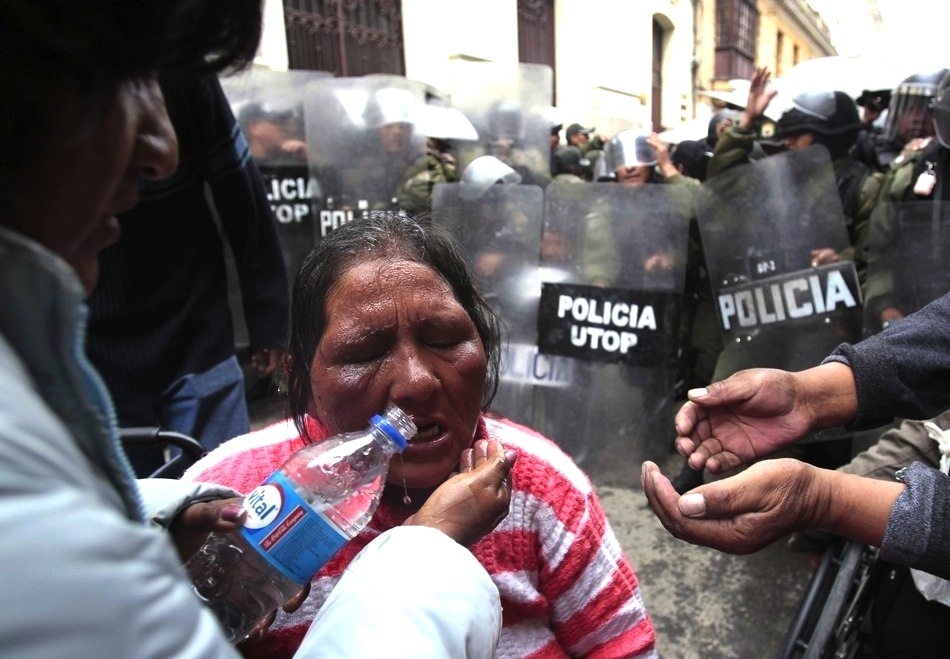 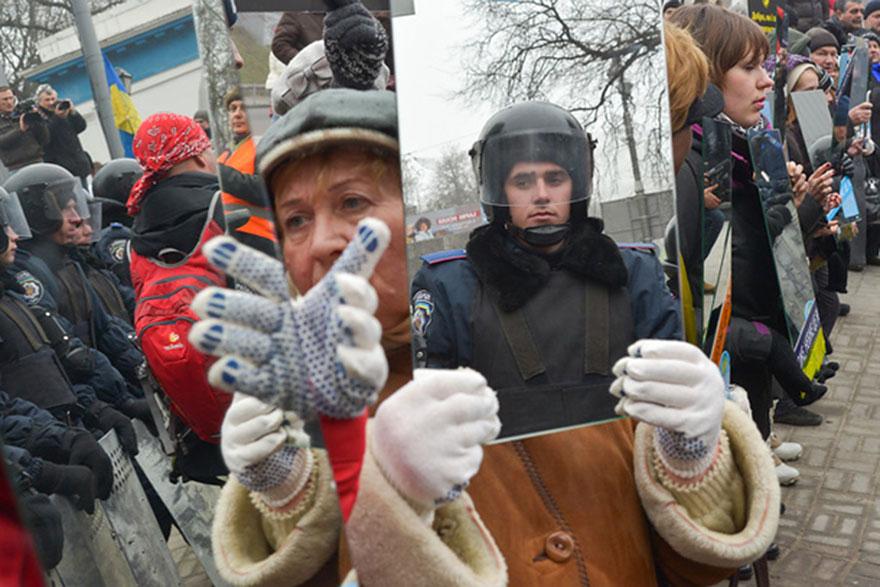 Protesters line up with mirrors in front of anti-riot police to show them their reflections and what they have turned into. (Image: Popular Resistance) 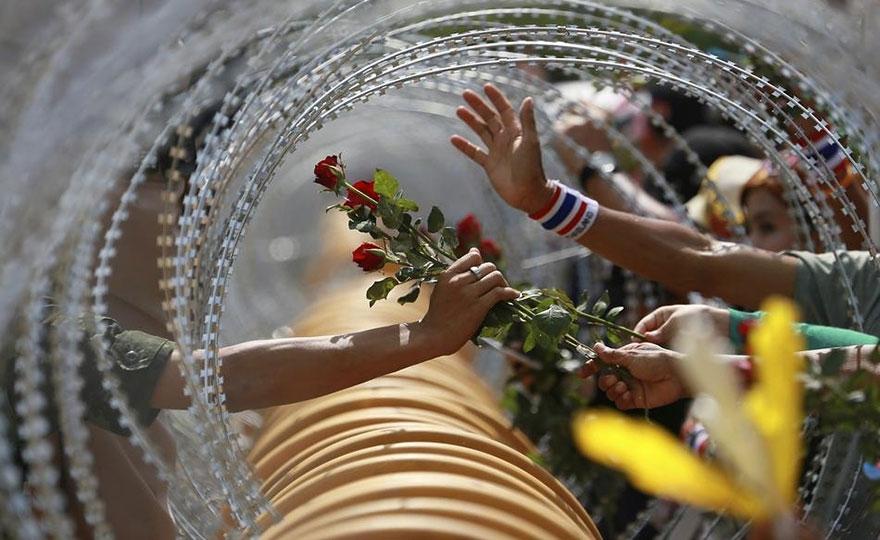 A protester extends a rose flower to a law enforcement officer during an anti-government protest in Bangkok (image: buzzfeed.com) 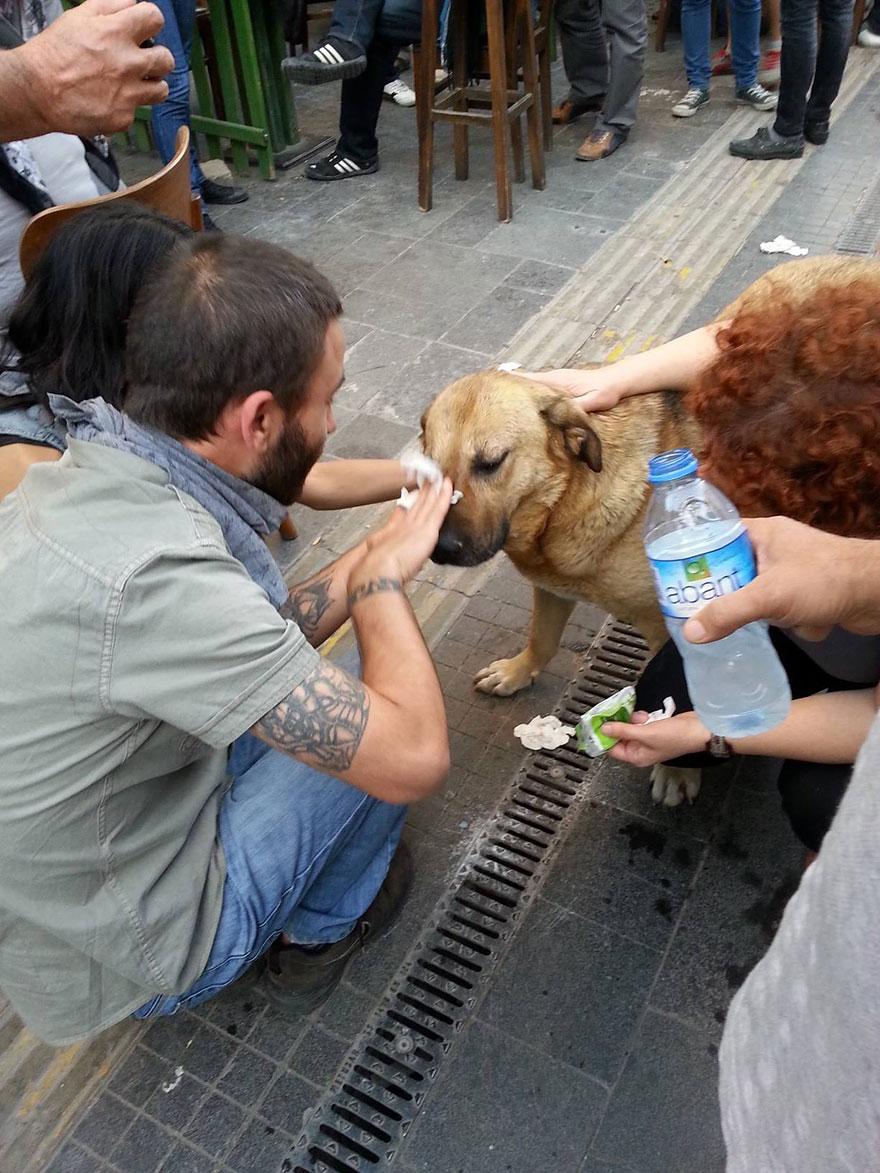 A dog suffering the effects of teargas gets help from Turkish protesters during a clash with police. (Image: imgur.com) 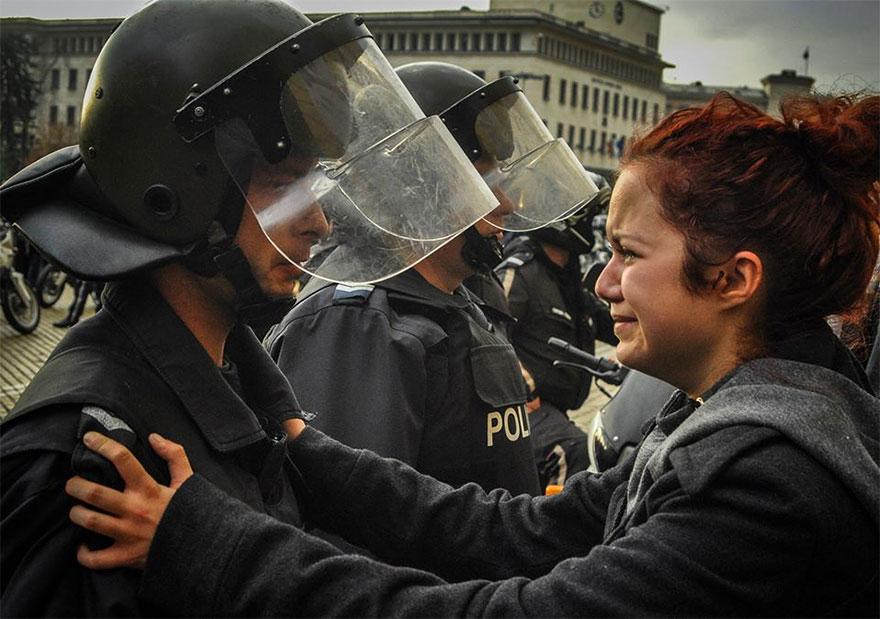 A law enforcement officer and a protester are moved to tears during a protest (image: bbc.co.uk/news). 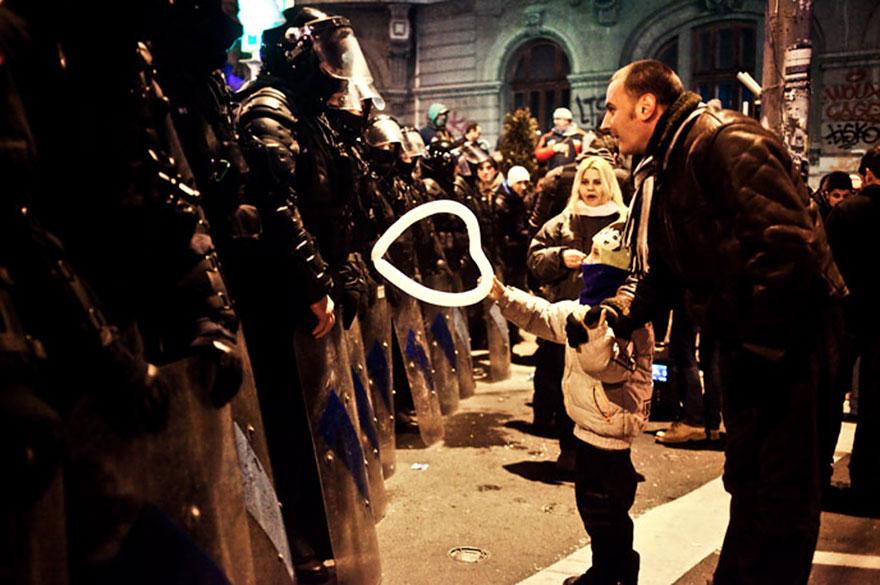 A young boy extends offer for peace in the form of a heart-shaped balloon to an anti-riot police officer in Romania. (Image: reddit.com) 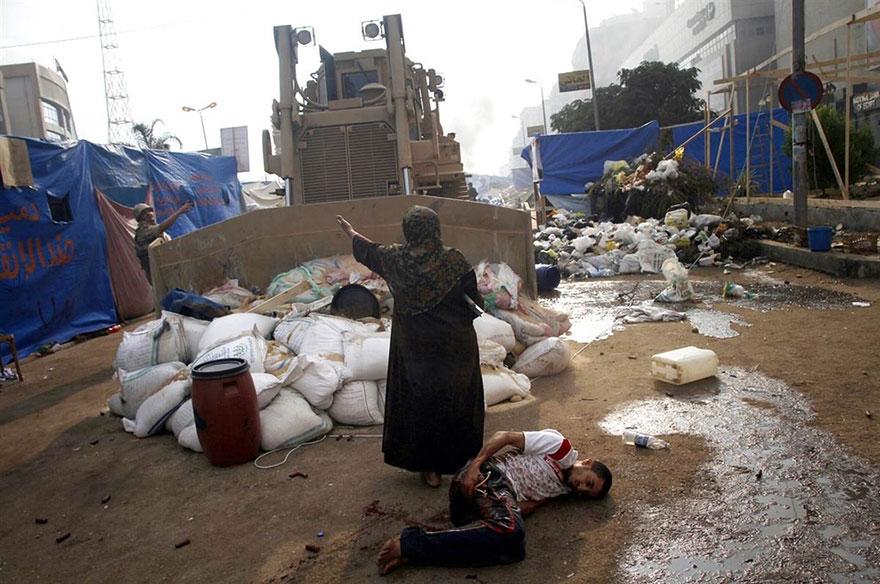 An elderly woman stands in front of a military bulldozer to protect a protester with gunshot wounds lying helplessly on the ground. (Image: buzzfeed.com) 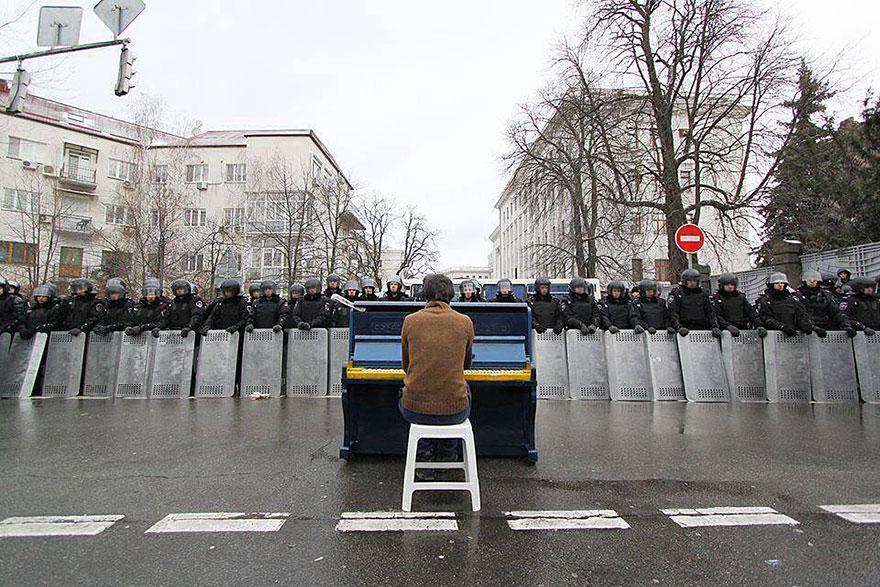 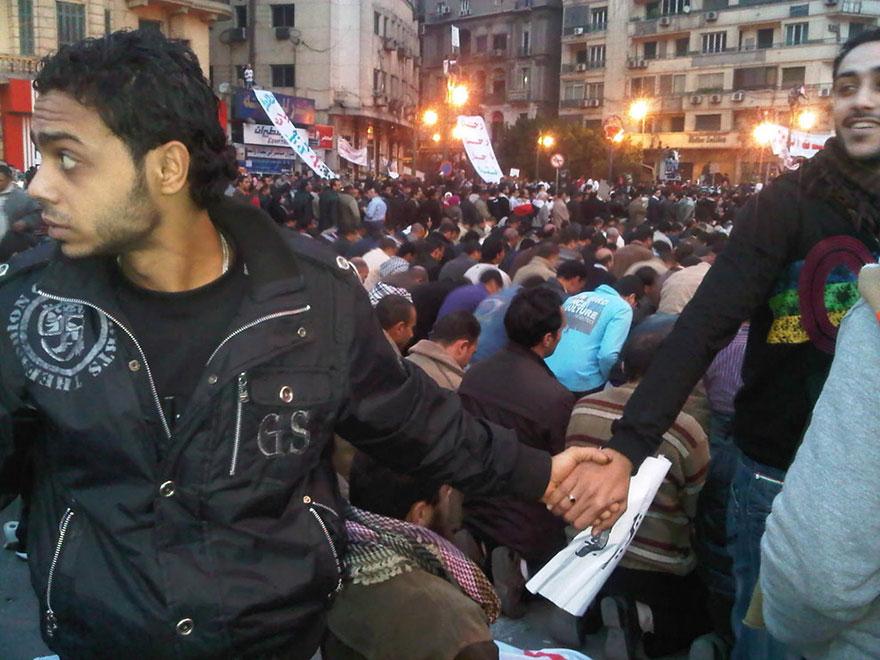 Christian protesters form a ring to protect Muslim protesters as they pray during the revolution demonstrations. (Image: reddit.com) 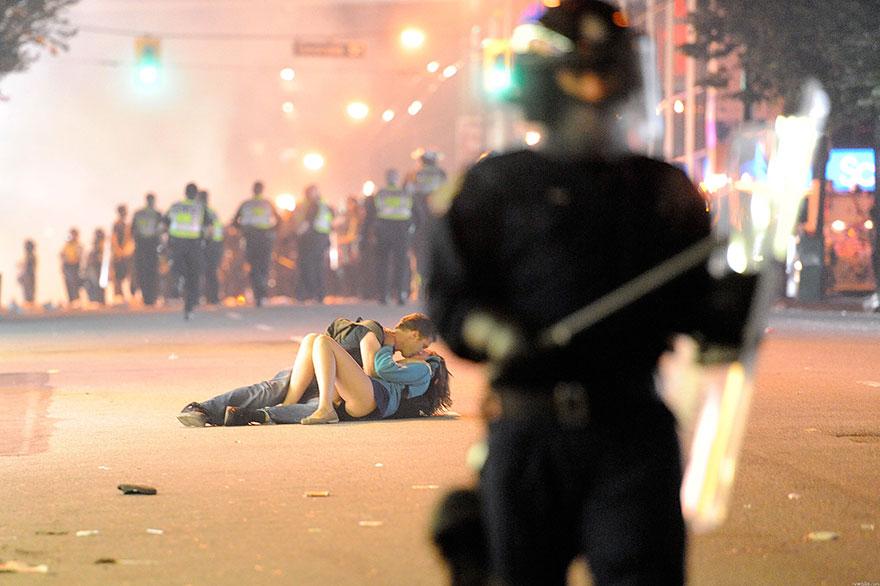 A couple risks it all to lay down and show love during a protest. (Image: twitter.yfrog.com) 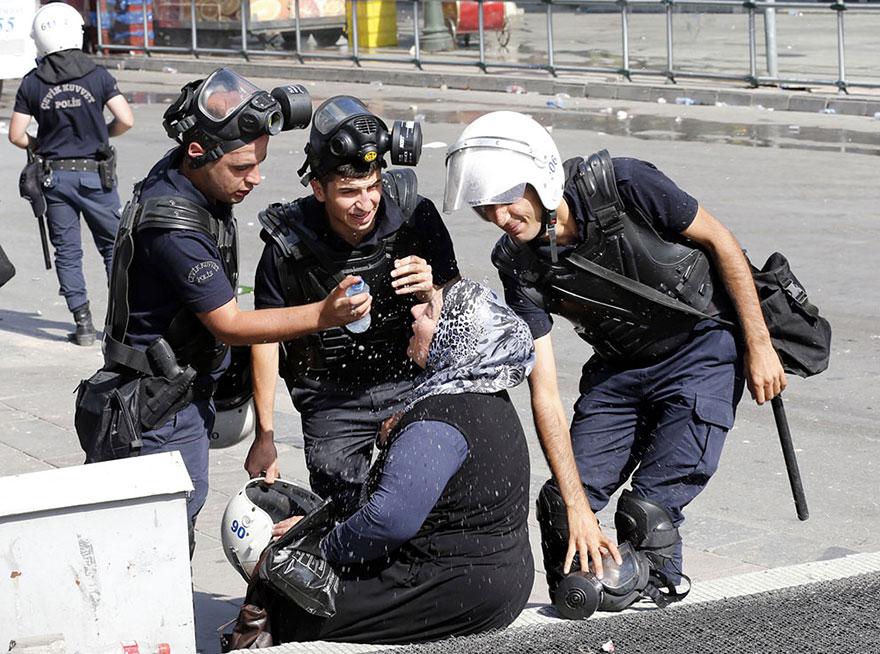 An Orthodox priest tries to prevent a clash between the police and demonstrators (Image: Sergei Supinsky) 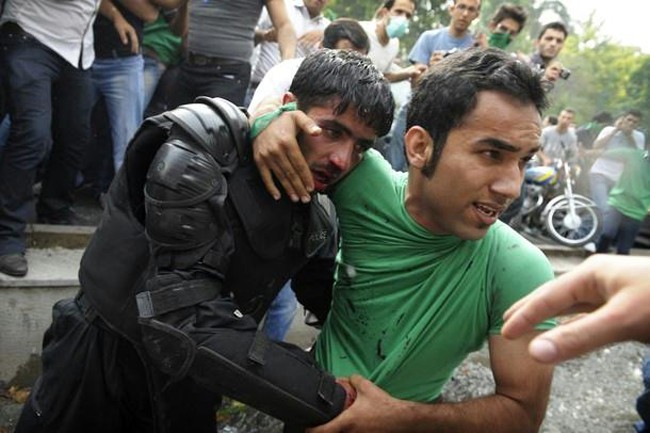 A protester protects and escorts injured cornered riot police officer to safety after he was beaten by rioters. (Image: cryptome.org) 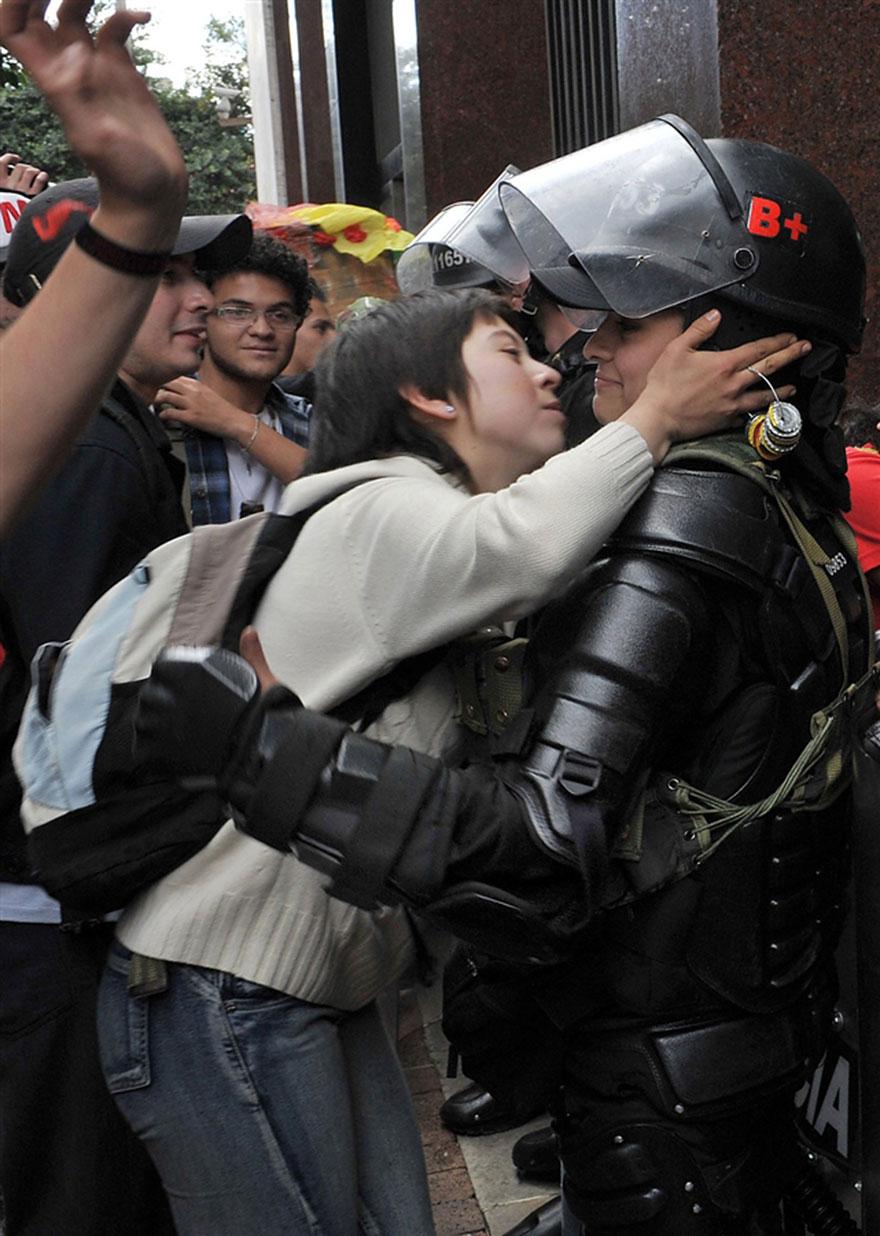 A student protester leans in to a riot police officer a kiss. (Image: msnbcmedia.msn.com) 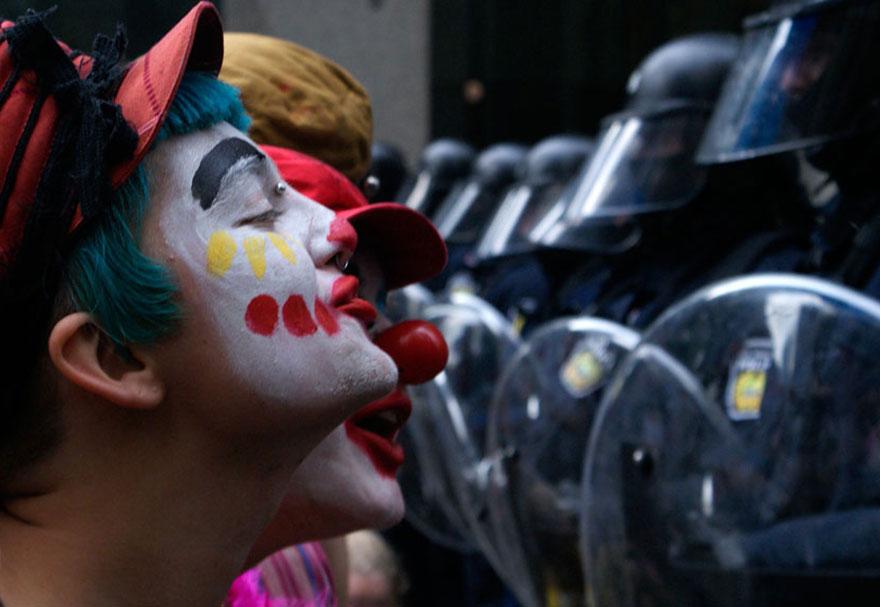 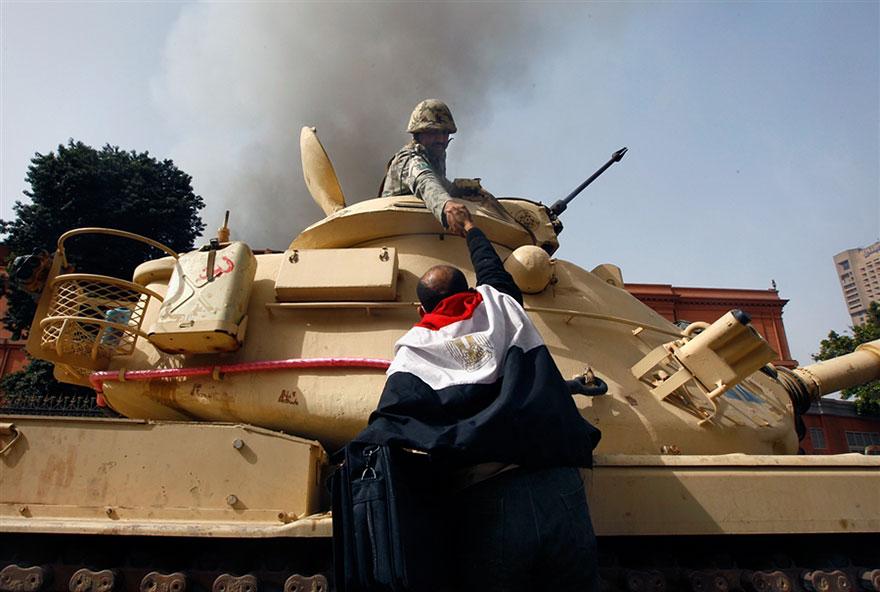 An Egyptian protester extends a hand of gratitude to an army soldier after they disobeyed orders to fire on civilians. (Image: abc.net.au) 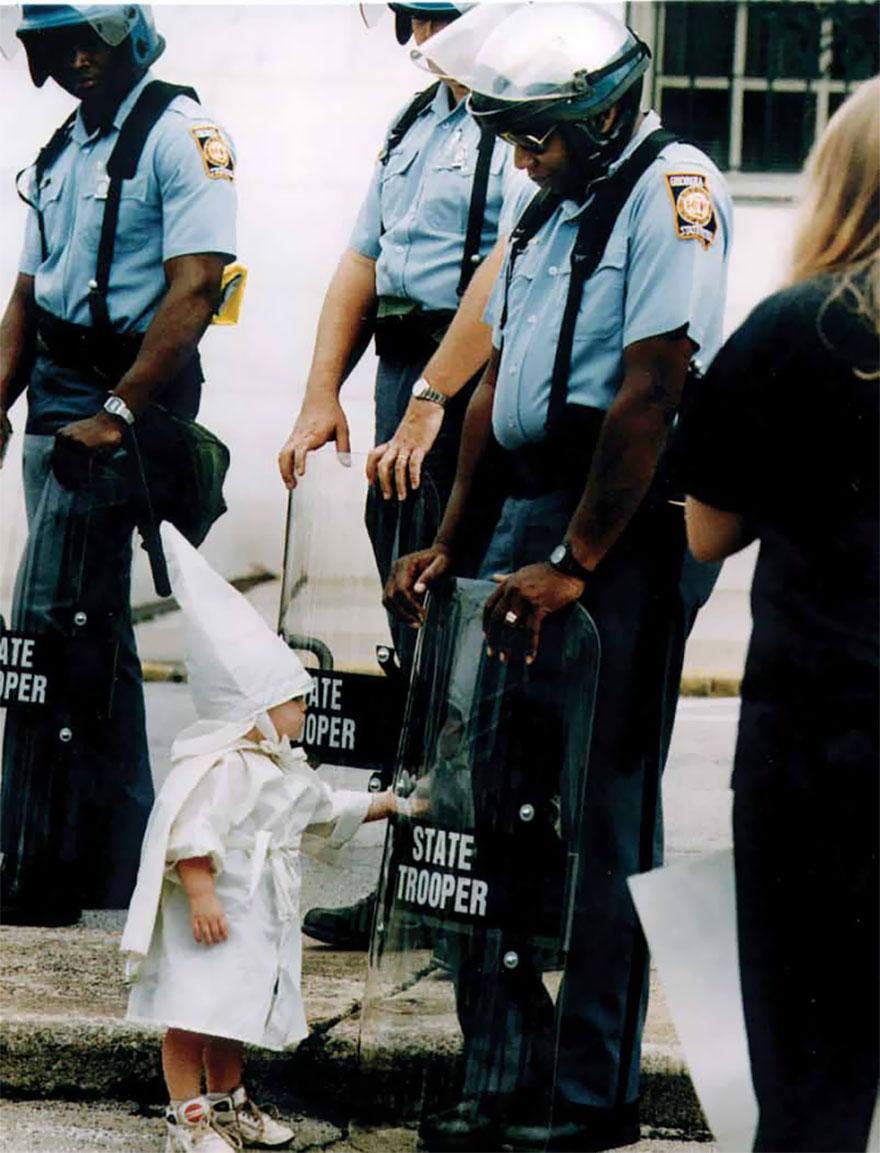 A young boy admires a reflection of the KKK outfit he is wearing on a riot shield. (Image: reddit.com)

-via emlii, bored panda and distractify