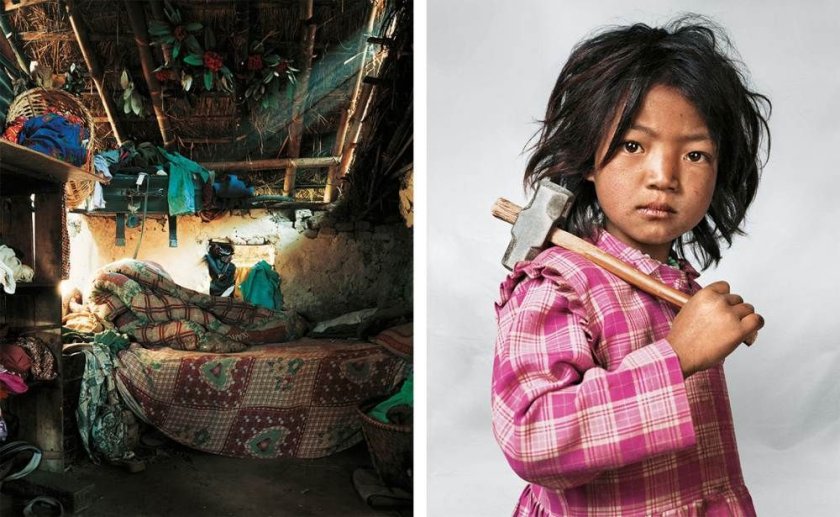 These photos by James Mollison say more about the world we live in than any story can. If you view them one by one, the images tell you quite a bit about how different kids around the world live, play and sleep. But viewed together they are a significant document of the world we live in – its inequalities, its cruelty, and the disconnect that lies beneath the platitude of a ‘global village’ – there is almost nothing to connect the 14 year old rich child from Jersey with the 3rd time pregnant kid of the same age who lives in a Brazilian slum.  The world is unbearable if it allows such gross unfairness is the first thought that strikes you.

Regardless these photos tell an astonishing story. They convey the social economic and political differences that kids must negotiate at an all too young age. They are a real window into different ways of life. Do you believe every child has a right to grow up in livable surroundings? What are you going to do about it? 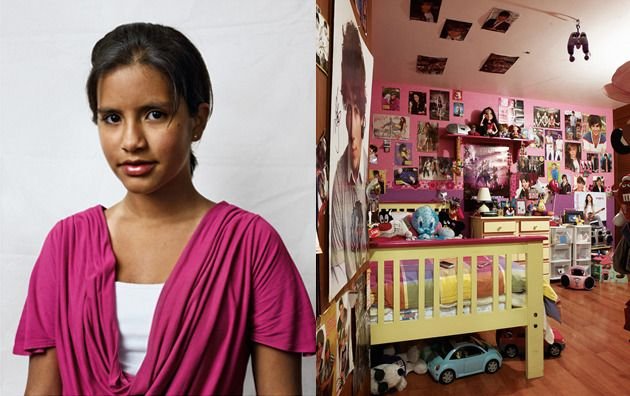 Mexico. Maria lives in Mexico City with her parents and older sister. Their home has three stories and is set around a courtyard, behind security gates. The family has taken security very seriously ever since one of her cousins was kidnapped by a gang. 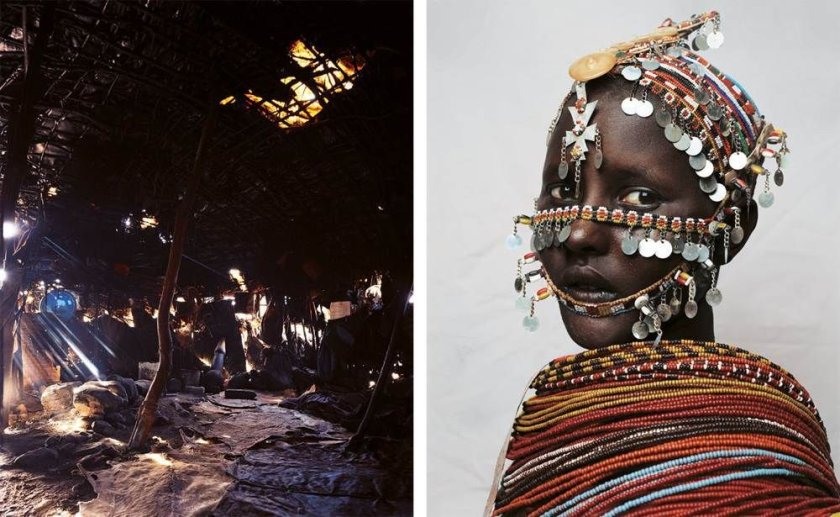 Kenya.  Nantio is a member of the Rendille tribe and lives with her two brothers and two sisters in a tent-like dome made from cattle hide and plastic, with little room to stand, in Lisamis, Kenya. She went to the village school for a few years but decided not to continue and is hoping a “moran” (warrior) will select her for marriage. 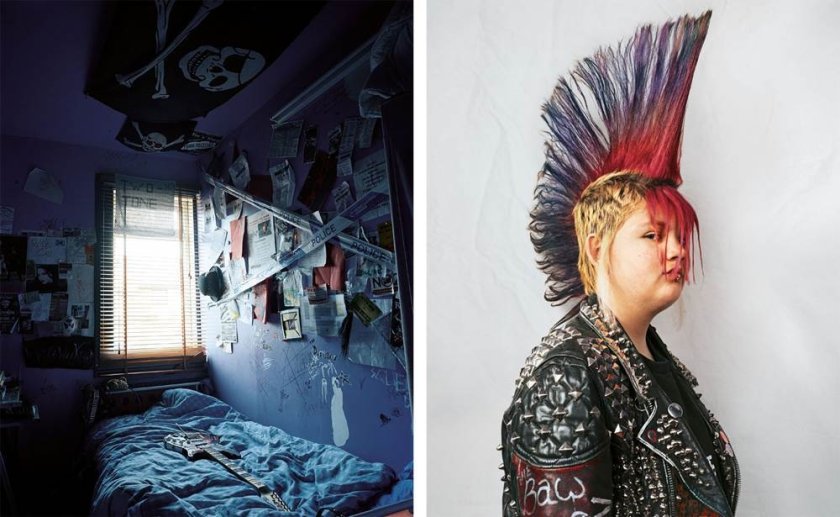 Scotland. Rhiannon lives with her parents and brother in a terraced house in Darel, Scotland, in an area plagued with heroin addiction and gang violence. She and her family have become used to abusive behavior from people in the neighborhood. Sporting a mohawk like her parents’ ever since she was six, Rhiannon and her family and friends are part of a punk subculture and have formed a community of support where they all look out for each other. 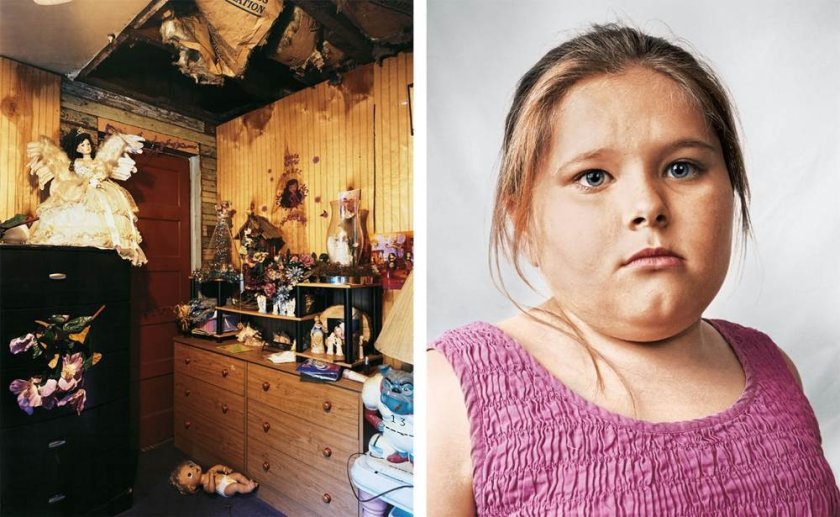 USA. Alyssa lives with her parents in Kentucky. She is an only child but her grandmother, uncle, and orphaned cousin live close by. Their small, shabby house, heated only by a wooden stove, is falling apart. The ceiling in Alyssa’s bedroom is beginning to cave in.  Alyssa’s mother works at McDonald’s and her father works at Walmart. 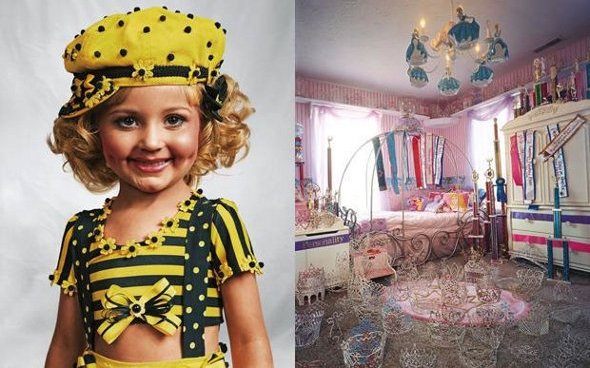 USA.  Four-year-old Jasmine (“Jazzy”) lives in a big house in Kentucky with her parents and three brothers. Her room is filled with crowns and sashes that she won in beauty pageants. Having entered more than 100 competitions so far, Jazzy enjoys being treated like a princess and would like to be a rock star when she grows up. 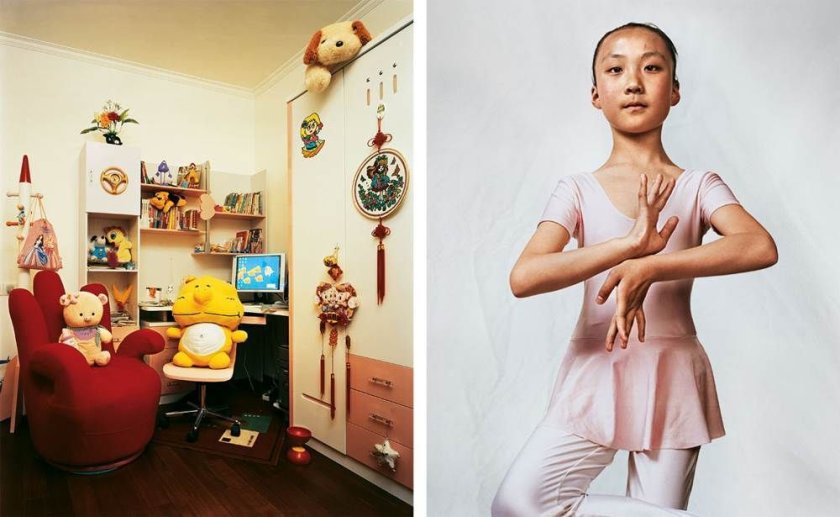 China.  Ten-year-old Li is a perfectionist and lives with her parents in an apartment block in Beijing. She spends up to three hours every night working on her homework, “completing it to the highest standard.” 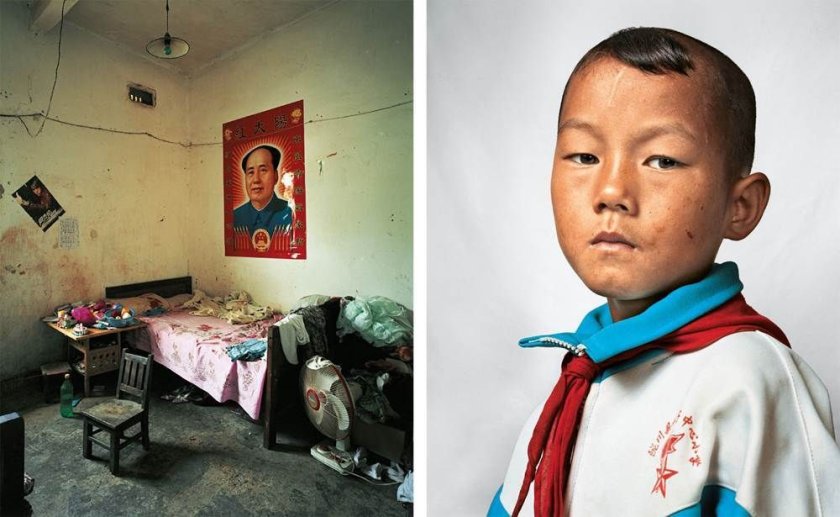 China. Dong is nine years old. He lives in the province of Yunnan in southwest China with his parents, sister, and grandfather. He shares a room with his sister and parents. They are a poor family who own just enough land to grow their own rice and sugar cane. 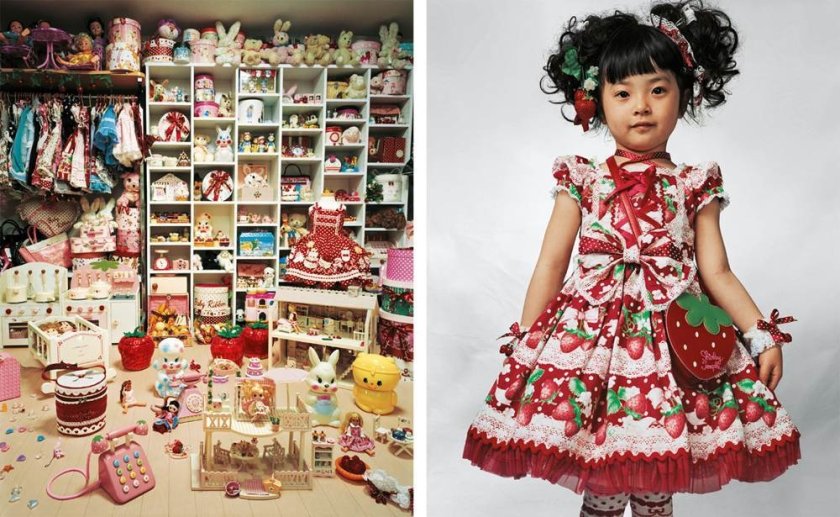 Japan. Living with her parents in a small apartment in Tokyo, 4-year-old Kaya’s bedroom looks like every little girl’s dream room. All of Kaya’s dresses are made by her mother — who makes up to three a month — and she has 30 dresses, coats, pairs of shoes, sandals and boots, and multiple wigs. 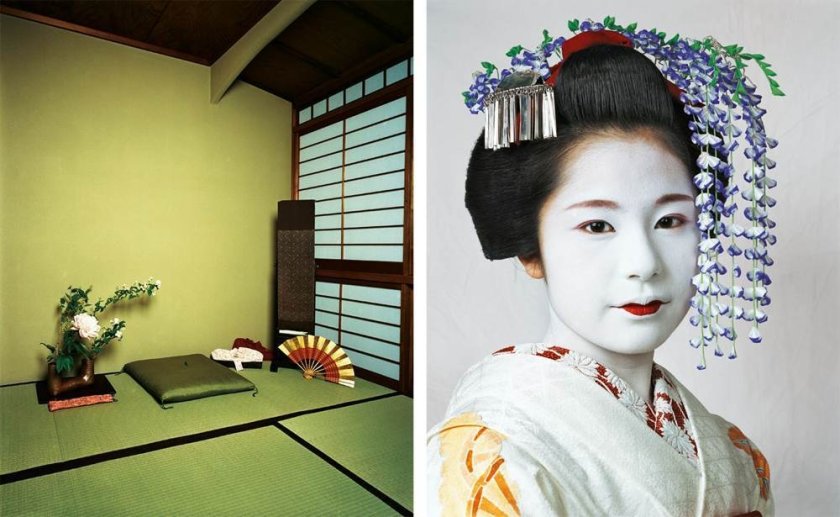 Japan. Living with 13 other women in a tea house in Kyoto, Japan, 15-year-old Risa is a “maiko” — an apprentice geisha. She sleeps with five other women in a room that doubles as a dining room and a tea room. 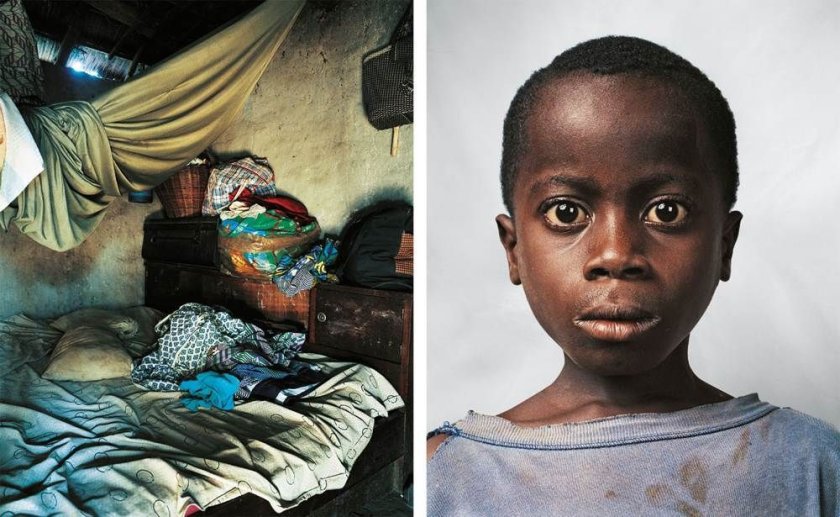 Ivory Coast.  An orphan and refugee from war in Liberia, this 9-year-old boy goes to school in Ivory Coast for ex-child soldiers and lives in a concrete shack with some of his classmates. 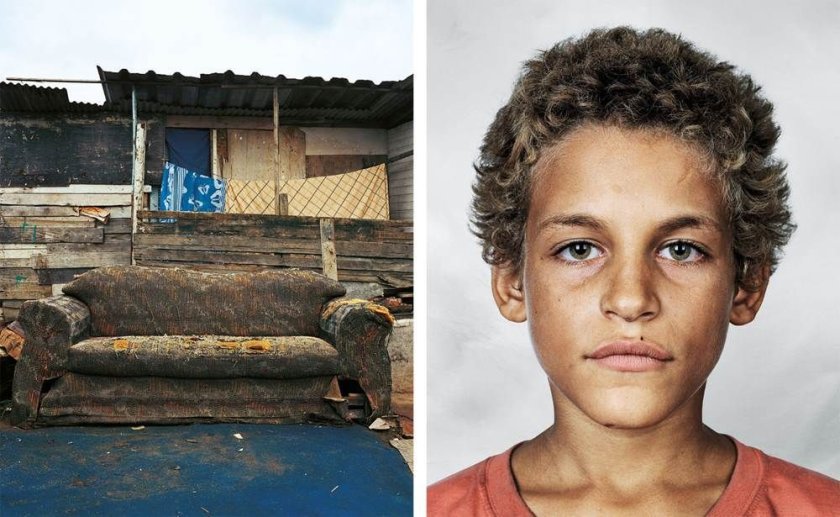 Brazil. Alex, a homeless 9-year-old from Rio de Janeiro, sleeps outside on an empty bench or discarded sofa if he’s able to find one; otherwise, his bed is the pavement. 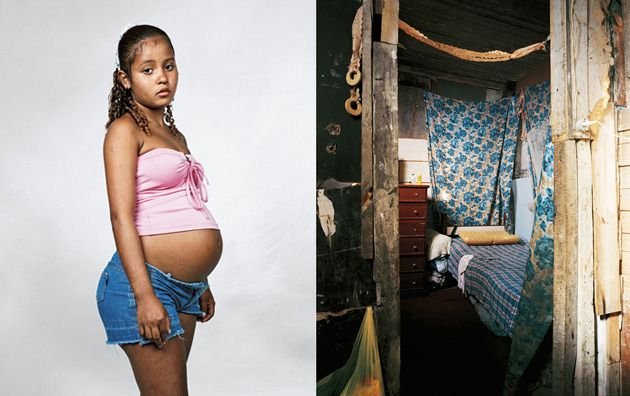 Brazil. Erlen 14 years old and is pregnant for the third time. She lives in a favela in Rio de Janeiro. Her home is a small shack. She usually sleeps on the floor, but now that she is in the later stages of her pregnancy, her mother has swapped places and allowed her to sleep in the bed. 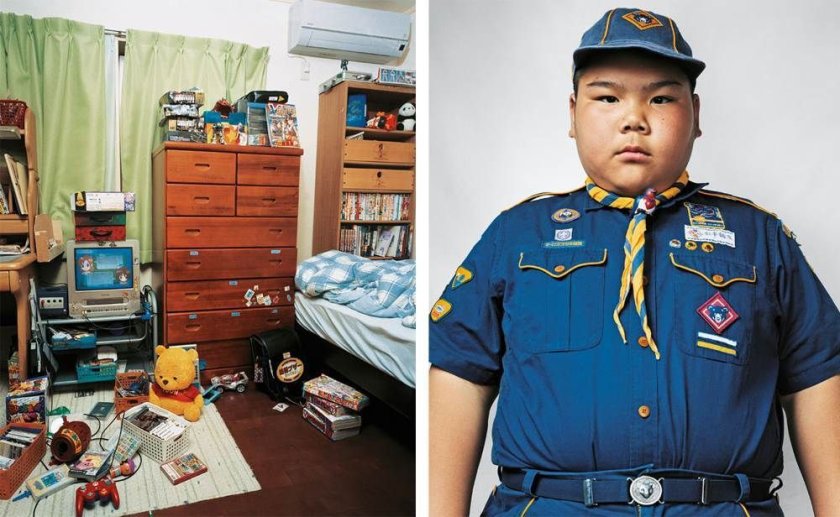 Tokyo.  Ryuta is a champion sumo wrestler and has been competing for seven years. He lives in Tokyo with his parents and younger sister and is also a member of the boy scout movement. 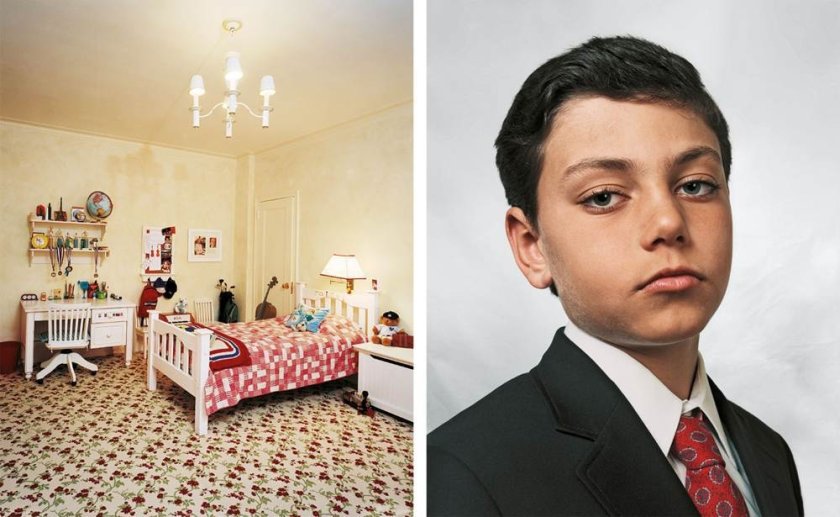 USA. Jaime is nine years old. He lives in a top-floor apartment on Fifth Avenue in New York. His parents also own luxury homes in Spain and in the Hamptons. 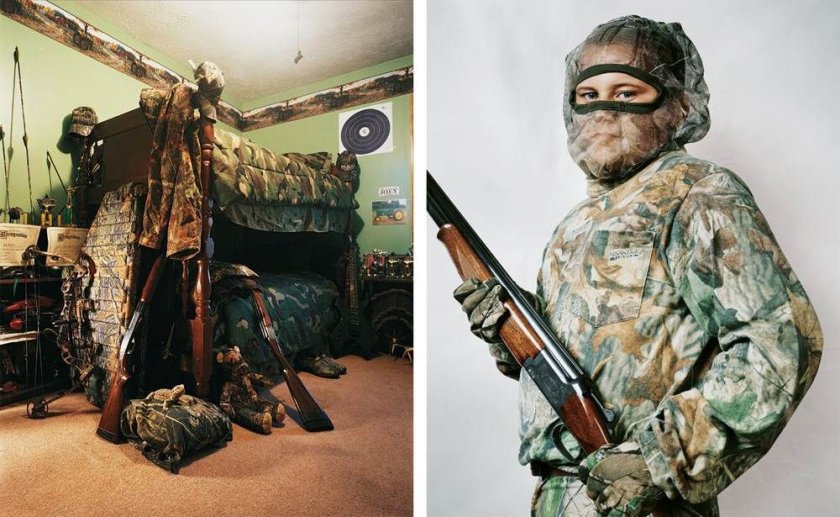 USA.  Joey lives in Kentucky with his parents and older sister. He is 11 years old. He regularly accompanies his father on hunts. He owns two shotguns and a crossbow and made his first kill—a deer—at the age of seven. 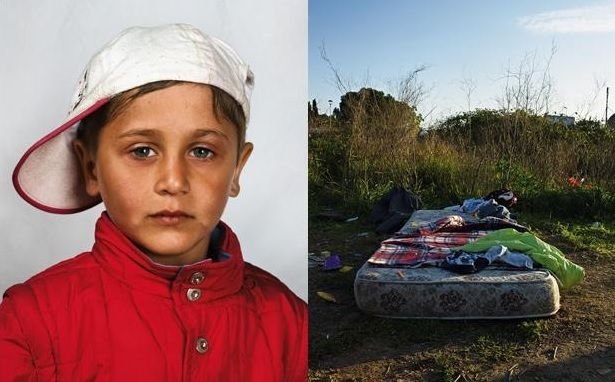 Italy. This 4-year-old Romanian boy sleeps with his family on a mattress in a field on the outskirts of Rome. After begging for money to pay for tickets, his family came from Romania by bus. With no identity papers, his parents clean windscreens at traffic lights since they cannot obtain legal work. None of his family members have ever been to school.

Nepal. Indira lives with her parents, brother, and sister near Kathmandu in Nepal. Her house has only one room, with one bed and one mattress. At bedtime, the children share the mattress on the floor. Indira is seven years old and has worked at the local granite quarry since she was three. 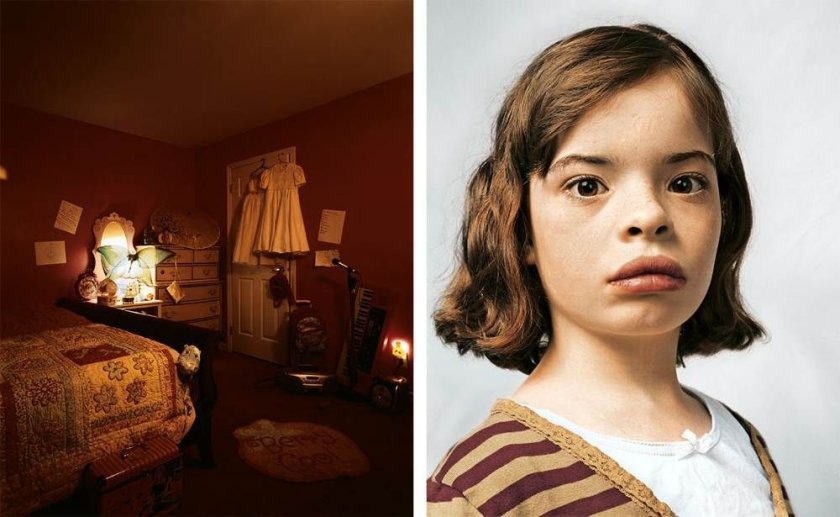 USA. Delanie lives with her parents and younger brother and sister in a large house in New Jersey where each child has his or her own bedroom. She aspires to be a fashion designer and design her own clothes. 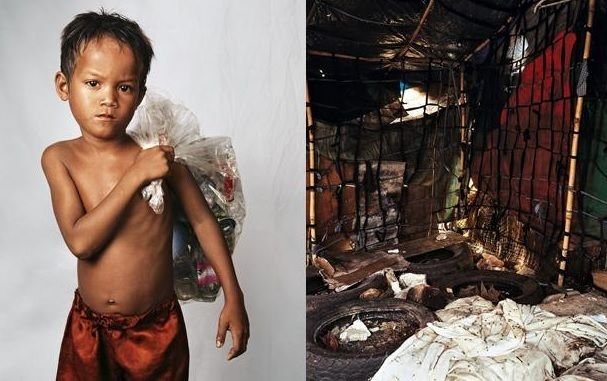 Cambodia. Eight-year-old Roathy’s home sits on a rubbish dump swarming with flies on the outskirts of Phnom Penh, Cambodia, where he sleeps on a mattress made from old tires. At 6 a.m. every morning, Roathy and  hundreds of other children are given a shower and breakfast at a local charity center before he starts work — scavenging for plastic bottles and cans, which are then sold to a local recycling company. Breakfast is sometimes the only meal of the day. 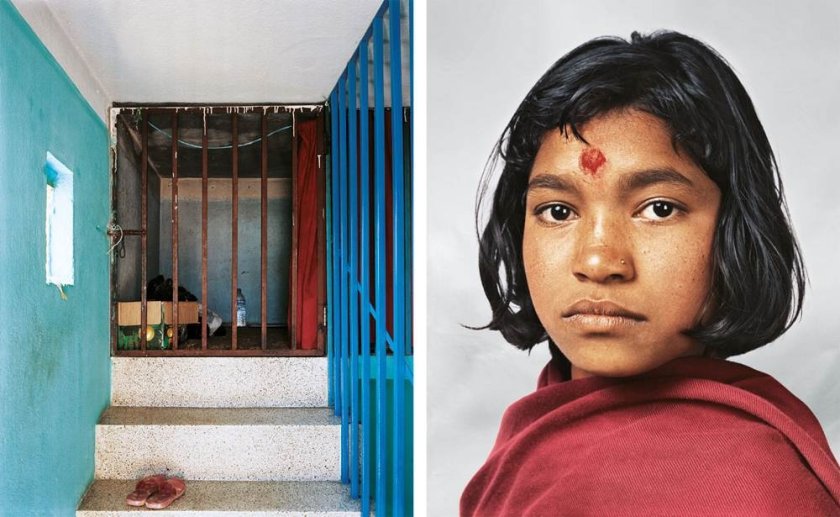 Kathmandu. Prena, a 14-year-old domestic worker in Kathmandu, Nepal works 13-hour days as a domestic worker, earns $6.50 a month, and sleeps in a tiny, cell-like space at the top of her employer’s house. She goes to school three times a week and dreams of one day becoming a doctor. 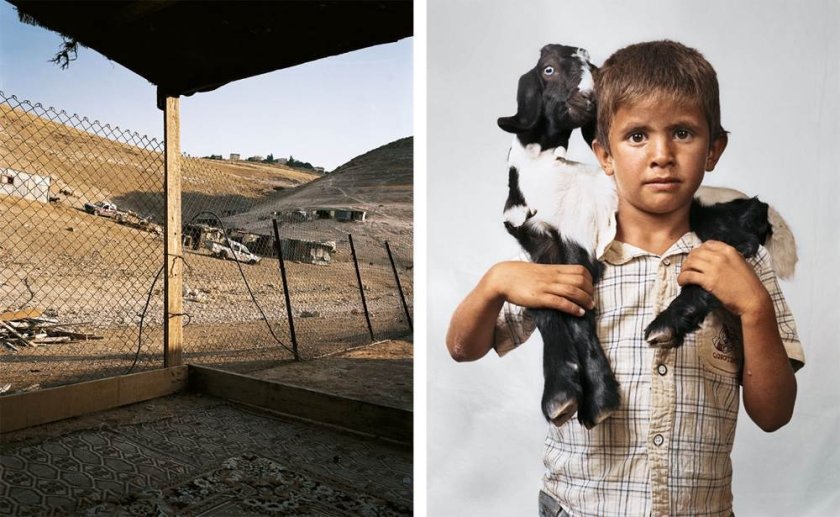 Palestine. Six-year-old Bilal’s family are Bedouin Arabs living in a one-room shack they built themselves besides an Israeli settlement at Wadi Abu Hindi in the West Bank. Bilal does not go to school yet but helps take care of his family’s 15 goats.

Around The World In 80 Drinks

US Kids Photos Of Their Disgusting School Lunch