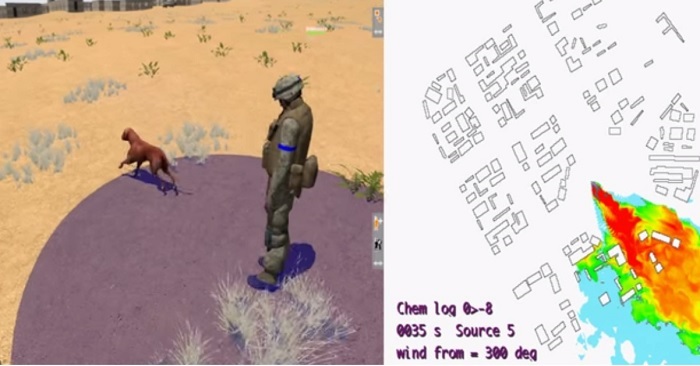 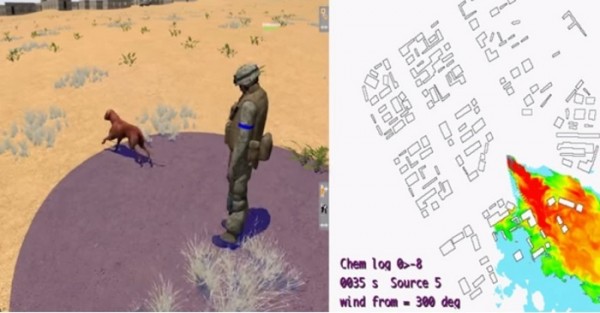 Currently, the U.S. Army is using a video game called ‘Virtual Battlespace’ to assist with training military personnel and improve working alongside bomb dogs. In order to create the stimulation, dog behaviour was research, and some 100s of hours of video footage from handlers and their dogs in Iraq were studied.

Engineering.com states: “Adam Moses is practicing dog command gestures with an Xbox Kinect in his office at the U.S. Naval Research Laboratory (NRL). On the screen in front of him, a virtual Labrador dog obediently moves through an empty desert village; together, they’re trying to locate a buried improvised explosive device (IED). Says Moses, ‘ONR [The Office of Naval Research] wanted a way for the human to train with a dog, with a virtual dog, that you can train with anytime, anywhere.”

Previously, Moses worked with a team to invent ROVER, a dog training module for military’s environment engine, Virtual Battlespace. Using the Xbox Kinect software, the hardware can detect hand gestures and whistles used to communicate and control the canine.

The plume of a bomb was programmed, where the scent of an IED travels with the wind as it subtly releases gases. To this day, there is no human-made technology that is able to detect the plume of an IED as its particles are diminutive, but Moses says that dogs can sniff per billion particles. Employing the skills and knowledge he acquired in studying the spread of airborne toxins and his 10 years of experience, he will also have to ensure that the stimulation is made as realistic as possible. 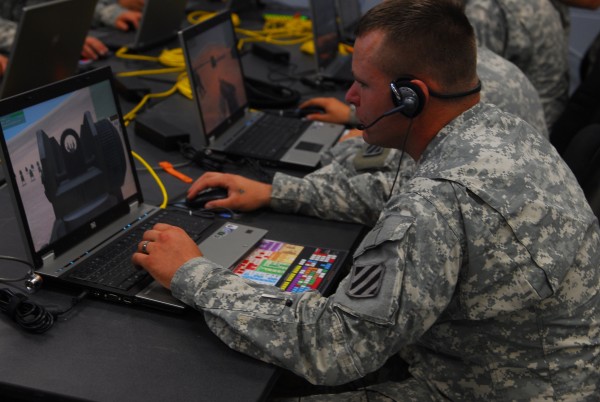 There is however more to the stimulation than just getting a dog to lock onto scent of an IED, as the user has to safely and predictably guide the guide dog based on its behaviour.

Moses shares that he hopes to develop the software to suit a range of different dogs with different behaviours and reactions. He also envisions it being tailored so that law enforcement agencies can also benefit from his creation.