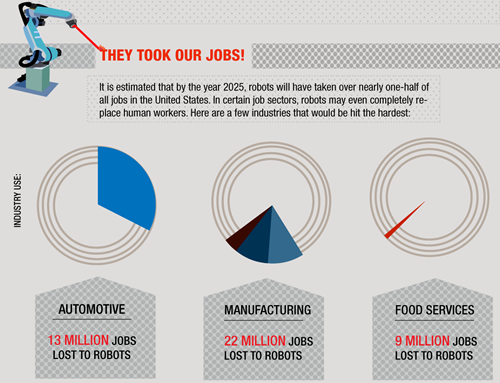 A robot stole my job back in 2008, and things are just getting worse, according to this infographic from Focus magazine. It’s a long graphic, so check out the full thing after the break.

Although I on principle don’t approve of the alarmist anti-robot language (even casually, unless it’s really funny), it’s a lot of interesting info… The big question, though, is whether it’s a bad thing or a good thing. Obviously, having a job and then not having a job because your boss bought a robot instead is a bad thing. But robots are designed to take over tasks that are dull, dirty, and dangerous, so hypothetically, the humans that are being replaced would be able to move on to more interesting tasks. Unfortunately, this is probably not the way it’s going to work, and it’s inevitable that a significant percentage of humans are just going to be made obsolete by robots that can perform repetitive tasks far faster and more precisely and don’t need breaks or air conditioning or pensions or health insurance or even lights.

I’m not saying that we should all go out and OMG PANIC because our jobs are at risk, but at the same time, it’s not something that would be nice to be surprised by. Maybe, if you get a chance, put a little bit of thought into this question: what is it that you do that a robot or computer program couldn’t?

Flying Cars — Fiction or Near Future?