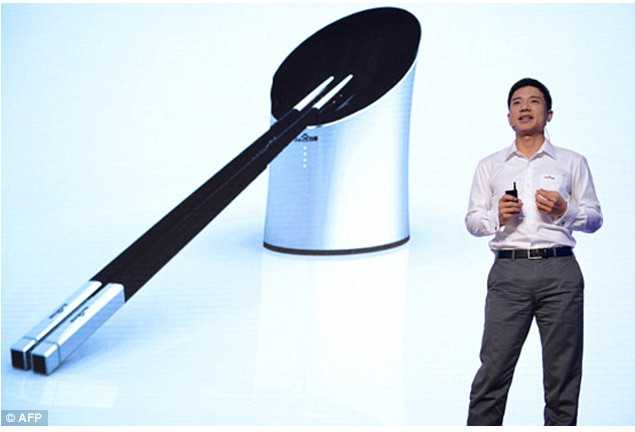 Chinese cuisine has been hit by a number of stomaching turning food scandals in recent months. Now one company in Beijing, China says it is ready to put a stop to the growing food reputation tarnishing with it’s latest invention, the smart chopsticks that detect contamination. Formally known as Kauisou, the chopsticks made it’s fist appearance as an April Fool’s joke.

Baidu, the creators had no serious intentions of making the concept a reality said a company representative. However, after it’s début “it generated a lot of excitement both internally and externally.” he said. The latest stage of development was unveiled this week, with a video release showing a company employee dipping the chopsticks into three different cups of oil. Sensors in the chopsticks detect the oil’s temperature and its suitability for consumption with the results displayed on a smartphone app.

The chopsticks emit red lighting when the cooking oil contains more than 25 TPMs or total polar materials, an indicator of freshness according to the company representative.  Poor food safety is a major threat in China with one of the country’s worst food scandals seeing the industrial chemical melamine illegally added to dairy products in 2008. The added ingredient claimed the lives of 6 children and saw over 300,000 adults succumb to illness.

‘Gutter oil’ is a particular concern – cooking oil illegally made by reprocessing waste oil or by dredging up leftovers from restaurants and marketing it as new. Health Authorities have taken serious measures to curb the practice with more than 100 people arrested, 20 imprisoned and 2 sentenced to life.

In another scandal several years ago, photographs surfaced showing pork that glowed eerie blue in the dark. It is believed that the meat was contaminated by phosphorescent bacteria that regulators claim was still safe to eat if properly cooked. The chopsticks invented by Baidu are seen as the means to an end. A statement released by the company declared that they have yet to decide on whether they will go into full production. Thus far prototypes have surfaced but an actual release date and pricing have not been announced as it relates to commercial use.