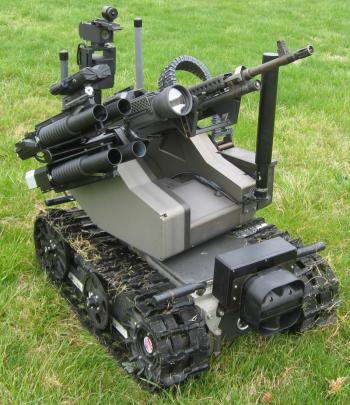 WASHINGTON – The unmanned bombers that frequently cause unintended civilian casualties in Pakistan are a step toward an even more lethal generation of robotic hunters-killers that operate with limited, if any, human control.
The Defense Department is financing studies of autonomous, or self-governing, armed robots that could find and destroy targets on their own. On-board computer programs, not flesh-and-blood people, would decide whether to fire their weapons.

The Army’s 350-pound MAARS (Modular Advanced Armed Robotic System) mobile robots, each carrying an M240B medium machine gun.”The trend is clear: Warfare will continue and autonomous robots will ultimately be deployed in its conduct,” Ronald Arkin, a robotics expert at the Georgia Institute of Technology in Atlanta, wrote in a study (.pdf) commissioned by the Army.

“The pressure of an increasing battlefield tempo is forcing autonomy further and further toward the point of robots making that final, lethal decision,” he predicted. “The time available to make the decision to shoot or not to shoot is becoming too short for remote humans to make intelligent informed decisions.”

Autonomous armed robotic systems probably will be operating by 2020, according to John Pike, an expert on defense and intelligence matters and the director of the security Web site GlobalSecurity.org in Washington.

This prospect alarms experts, who fear that machines will be unable to distinguish between legitimate targets and civilians in a war zone.

“We are sleepwalking into a brave new world where robots decide who, where and when to kill,” said Noel Sharkey, an expert on robotics and artificial intelligence at the University of Sheffield, England.

As of now, about 5,000 lethal and nonlethal robots are deployed in Iraq and Afghanistan. Besides targeting Taliban and al Qaida leaders, they perform surveillance, disarm roadside bombs, ferry supplies and carry out other military tasks. So far, none of these machines is autonomous; all are under human control.

The Pentagon’s plans for its Future Combat System envision increasing levels of independence for its robots.

“Fully autonomous engagement without human intervention should also be considered, under user-defined conditions,” said a 2007 Army request for proposals to design future robots.

For example, the Pentagon says that air-to-air combat may happen too fast to allow a remote controller to fire an unmanned aircraft’s weapons.

“There is really no way that a system that is remotely controlled can effectively operate in an offensive or defensive air-combat environment,” Dyke Weatherington, the deputy director of the Pentagon’s unmanned aerial systems task force, told a news conference on Dec. 18, 2007. “The requirement for that is a fully autonomous system,” he said. “That will take many years to get to.”

Many Navy warships carry the autonomous, rapid-fire Phalanx system, which is designed to shoot down enemy missiles or aircraft that have penetrated outer defenses without waiting for a human decision-maker.

At Georgia Tech, Arkin is finishing a three-year Army contract to find ways to ensure that robots are used in appropriate ways. His idea is an “ethical governor” computer system that would require robots to obey the internationally recognized laws of war and the U.S. military’s rules of engagement.

“Robots must be constrained to adhere to the same laws as humans or they should not be permitted on the battlefield,” Arkin wrote.

For example, a robot’s computer “brain” would block it from aiming a missile at a hospital, church, cemetery or cultural landmark, even if enemy forces were clustered nearby. The presence of women or children also would spark a robotic no-no.

Arkin contends that a properly designed robot could behave with greater restraint than human soldiers in the heat of battle and cause fewer casualties.

“Robots can be built that do not exhibit fear, anger, frustration or revenge, and that ultimately behave in a more humane manner than even human beings in these harsh circumstances,” he wrote.

Sharkey, the British critic of autonomous armed robots, said that Arkin’s ethical governor was “a good idea in principle. Unfortunately, it’s doomed to failure at present because no robots or AI (artificial intelligence) systems could discriminate between a combatant and an innocent. That sensing ability just does not exist.”

Selmer Bringsjord, an artificial intelligence expert at Rensselaer Polytechnic Institute in Troy, N.Y., is worried, too.

“I’m concerned. The stakes are very high,” Bringsjord said. “If we give robots the power to do nasty things, we have to use logic to teach them not to do unethical things. If we can’t figure this out, we shouldn’t build any of these robots.”