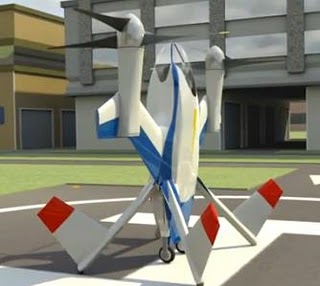 A super-quiet, hover-capable aircraft design, NASA’s experimental one-man Puffin could show just how much electric propulsion can transform our ideas of flight. It looks like nothing less than a flying suit or a jet pack with a cockpit.

On the ground, the Puffin is designed to stand on its tail, which splits into four legs to help serve as landing gear. As a pilot prepares to take off, flaps on the wings would tilt to deflect air from the 2.3-meter-wide propeller rotors upward, keeping the plane on the ground until it was ready to fly and preventing errant gusts from tipping it over. The Puffin would rise, hover and then lean over to fly horizontally, with the pilot lying prone as if in a glider. When landing, the extending spring legs would support the 3.7-meter-long, 4.1-meter-wingspan craft, which is designed with carbon-fiber composites to weigh in at 135 kilograms, not including 45 kilograms of rechargeable lithium phosphate batteries.

Here is the discovery’s report

In principle, the Puffin can cruise at 240 kilometers per hour and dash at more than 480 kph. It has no flight ceiling—it is not air-breathing like gas engines are, and thus is not limited by thin air—so it could go up to about 9,150 meters before its energy runs low enough to drive it to descend. With current state-of-the-art batteries, it has a range of just 80 kilometers if cruising, “but many researchers are proposing a tripling of current battery energy densities in the next five to seven years, so we could see a range of 240 to 320 kilometers by 2017,” says researcher Mark Moore, an aerospace engineer at NASA’s Langley Research Center in Hampton, Va. He and his colleagues will officially unveil the Puffin design on January 20 at anAmerican Helicopter Society meeting in San Francisco.

Moore and his colleagues at NASA, the Massachusetts Institute of Technology, the Georgia Institute of Technology, the National Institute of Aerospace, and M-DOT Aerospace named their craft the Puffin because “if you’ve ever seen a puffin on the ground, it looks very awkward, with wings too small to fly, and that’s exactly what our vehicle looks like,” he explains. “But it’s also apparently called the most environmentally friendly bird, because it hides its poop, and we’re environmentally friendly because we have essentially no emissions. Also, puffins tend to live in solitude, only ever coming together on land to mate, and ours is a one-person vehicle.”

This design relies on electric motors. These remain efficient regardless of their size, whereas internal combustion engines become less efficient the smaller they are. As such, electric aircraft can use small motors while generating impressive propulsion—the Puffin can lift a person with just 60 horsepower.