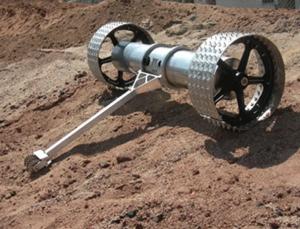 While efforts to rescue NASA’s Spirit continue (as reported by us a few days back), NASA has also funded research to design all terrain robots. Inventors finally came up with this simple spool-shaped robot could one day rappel into steep craters on other planets or moons, anchored to another spacecraft by a rope.

This robot is the research outcome of NASA and Caltech engineers designing an all terrain movement system. This unique robot consists of a simple cylinder with a wheel on either side. The wheels can roll over 0.5-metre-tall rocks.

Called Axel, the robot has an arm that can move 360° around its wheel shaft. We were lucky to find this video, which shows this robot in action.