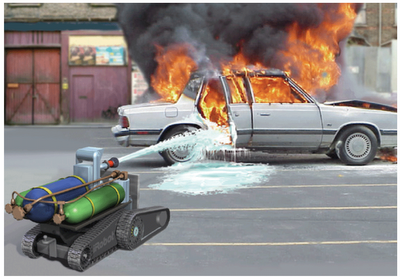 Fire fighting robot competitions have been a part of mechatronics departments’ activities around the world for years. Often, use of robots for fire-fighting purposes sounds as an over use of robots. But the increased number of accidents invloving fire-fighters during fire response has demanded for safer method to fight fires.

Acetylene gas cylinders poses a particular risk to emergency services when a fire is suspected to involve cylinders of the gas.

When subjected to heat, the cylinders’ contents can undergo a chemical reaction that creates even more heat. As a result, acetylene cylinders can become a time bomb even after a fire has been extinguished, putting emergency responders and the public in danger. Such robots come handy by preventing firefighters from harm’s way in situations like these.

So far in 2009, the robots have been involved in 10 incidents. The video shows these robots in action.