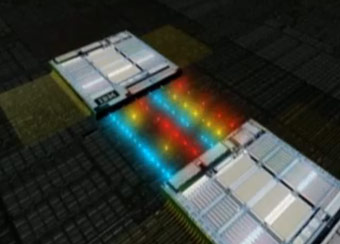 IBM researchers, renowned for their innovative technology patents, have developed a process that replaces copper wire in computer chips with light pulses, speeding information transfer and using 20 times less energy than prior versions.

Although the technology of nanophotonic avalanche photodetectors is not brand new, the company claims that its process is the fastest yet, and a significant advancement to current devices. The IBM invention receives optical signals and then increases them tenfold. Copper wire, currently used to transfer electrical signals between computer chips, is totally eliminated in the IBM device, which uses silicon circuits instead. The energy-saving chips can transmit data up to 40 gigabits per second with the equivalent of 1.5 volts of power, similar to a AA battery.

Here is the video illustration that IBM created to further explain the technology:

The technology may not be available commercially for five to ten years. But once the new silicon photonics technology is incorporated into servers, cell phones, and other devices, the potential for a radical reduction in energy usage should be fulfilled. The use of nanophotonics is expected to bring significant changes to the chip industry over the next decade.

Converting the formats of videos to iPad, iPod, and iPhone