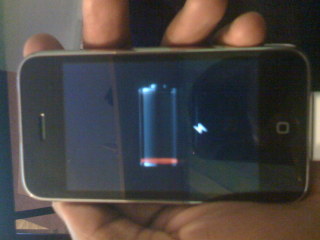 Apple 3G iPhone is exceptional in its performance. It rarely poses problems for its users. However, sometimes the phone crashes or stuck on a red blinking low battery screen. It also gives misleading battery information, e.g. when battery is almost empty, it reports it as full.

When the phone gets stuck due to this problem, there is a very simple way to fix it. When the iPhone stuck with this indicator of low battery, after three blinks it will be shut down automatically. You can start this process once the phone gets off

So restoring the iPhone from stuck position is as simple that it can be done in two steps within seconds.