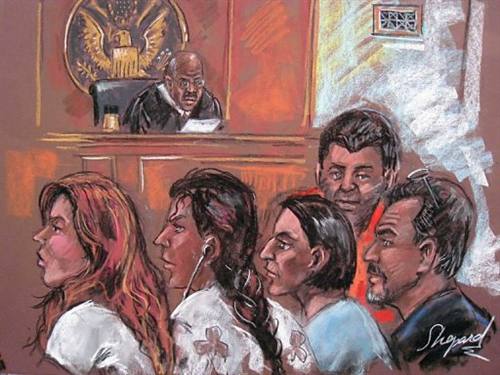 Invisible ink, buried money and radio transmission: in many ways it seems the Russian spy ring recently apprehended by the US Department of Justice (DOJ) took its cues from old-school Soviet operatives. With one notable exception: in the case of the classic spy “dead drop” – a location used to secretly pass items between two people – these spies went digital.

According to the DOJ’s charges, the group communicated by posting images encoded with secret messages to public websites, a modern twist on an ancient practice known as steganography. Before you reach for the invisible ink, New Scientist fills you in on this growing digital trend

What is digital steganography?

Digital steganography can take the form of text hidden in the pixels of a photograph or inaudible changes to a sound file. Unlike cryptology, which uses a secret code to thwart eavesdroppers, steganography tries to create a covert channel so a third party doesn’t even realise two groups are communicating. The original practice dates back to ancient times when messengers concealed tattooed messages on their scalps that were revealed by shaving.

Since the 1980s, computer technologies have made steganography easier. Today everything from voice over IP to digital filing systems can be exploited to hide more information in ever more sophisticated ways. Hundreds of computer programs can read and encode messages in digital files.

How did the spy ring exploit this technology?

The DOJ retrieved more than 100 messages hidden within online pictures that it linked to the spy group. Once a message-laden image was posted online, the receiving party would download the image and use software to interpret it.

Posting pictures to the web has the advantage of making it hard to determine who the message is aimed at: many people might visit the site holding the steganographic pictures, but only the fellow spy would know they contain a hidden message. The huge number of pictures on the web also makes it harder for an investigator to home in on the ones that contain hidden messages.

How popular is digital steganography?

Chet Hosmer, chief scientist at cyberdetective company WetStone Technologies, in Conway, South Carolina – a division of Allen Corporation – says there is a large and growing number of cases. “Because some of this is being exposed [now], doesn’t mean it hasn’t been going on,” he explains.

Software that reads and embeds secret information is freely available on the web. According to steganography expert Gary Kessler, a private consultant based in Burlington, Vermont, hundreds of different programs are available on sites such as stegoarchive.com.

One worry is employees leaking company secrets via digital steganography. Hosmer says organisations the world over are concerned about this problem: investigators in both the private and public sectors have attended his training sessions to learn how to detect steganography. Pornographers might also make use of digital steganography to hide illegal images stored on their computer, he adds.

How can you detect it?

A number of different programs can pick out features of images that indicate that the images have been altered. Some investigators simply scan the web for images containing such artefacts. Others take a more targeted approach, searching the computers of suspects for clues as to how the person has been manipulating files, and which kinds of files they have been altering. This can then be used to guide a web search.

Are there ways to make steganography harder to detect?

It’s easier for investigators to decipher steganography if they have access to the “before” image, so using an original picture rather than one freely available on the web is preferred. Good subjects include pictures with many different colours and few patches of the same shade because that makes the colour variations that encode the message harder to spot. The size of the medium that hides the data also has to be in proportion to the size of the material it’s concealing.

What shape will steganography take in the future?

As long as espionage and criminal activity exist, says Hosmer, the demand for covert communication and new technologies that enable more sophisticated steganography will continue. Hiding information in movies is a likely trend. “The bad guys are always looking for a way to use those new things as a way to more effectively communicate,” he adds.

A US court has refused to grant bail to ten people arrested on suspicion of spying for Russia. Five of them have appeared before a judge to hear charges including ‘conspiracy to act as agents of a foreign government’ and ‘money laundering.’