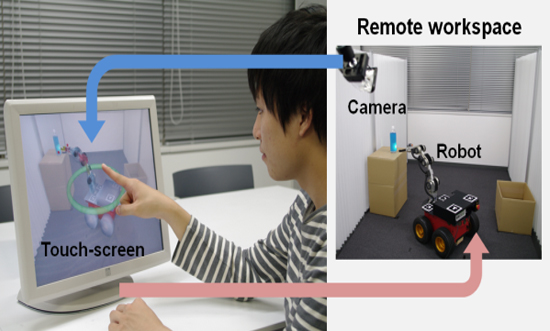 A number of researches and projects are being carried out on Augmented reality. We found something different and cool to add in this field. The advancement in science and its linkage and diversity in every field makes it more vulnerable for scientists and researchers to give it a change of taste.

The basic augmented reality has been programmed and designed for controlling and interacting with other humans. And now our new systems demand us to be more adaptive towards robotic technology, so to integrate the robots with augmented reality a whole setup was made in which a there appear a ghost image of robot on the actual image, to which you can actually interact with that ghost image via a touch screen. The robot correspondingly obeys all commands as you give them on the screen via touching the ghost image. The TouchMe interface was developed by the team of researchers at Japan Science and Technology Agency (JST) and it was put in work with the robot.

Here is how it actually works

Get Photo GPS and Geolocation Data on iPhone