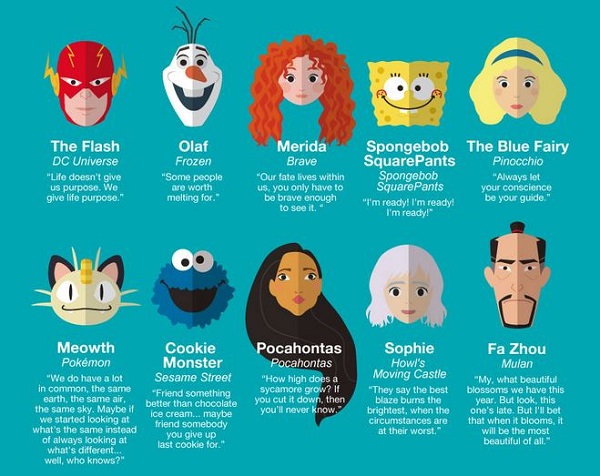 Who would have thought that cartoons weren’t just about the action and the fairytales? Cartoons are an important part of a child’s development, in fact, they have great cites to share with children that some of them you didn’t realize yourself as their guardians were actually motivational quotes.

Check out this list that was compiled by AAA State of Play that highlights 50 cartoon characters that had quotes to share with your little ones to boost them up.

The Flash (DC Universe) – ” Life doesn’t give us purpose. We give life purpose.”

Olaf (Frozen) – “Some people are worth melting for.”

Merida (Brave) – “Our fate lives within us, you only have to be brave enough to see it.”

The Blue Fairy (Pinocchio) – “Always let your conscience be your guide.”

Cookie Monster (Sesame Street) – “Friend something better than chocolate ice cream… maybe friend somebody you give up last cookie for.”

Pocahontas (Pocahontas) – “How high does a sycamore grow? If you cut it down, then you’ll never know.”

Sophie (Howl’s Moving Castle) – “They say the best blaze burns the brightest, when the circumstances are at their worst.”

Fa Zhou (Mulan) – “My, what beautiful blossoms we have this year. But look, this one’s late. But I’ll bet that when it blooms, it will be the most beautiful of all.”

Patrick Star (Spongebob Squarepants) – “Sometimes we have to go deep inside ourselves to solve our problem.”

Iroh (Avatar: The Last Airbender) – “In the darkest times, hope is something you give yourself. That is the meaning of inner strength.”

The Emperor of China (Mulan) – “The flower that blooms in adversity is the most rare and beautiful of all.”

Snow White (Snow White and the Seven Dwarfs) – “You’re never too old to be young.”

Edna Mode (The Incredibles) – “I never look back darling. It distracts from the now.”

Jake (Adventure Time) – “Sucking at something is the first step to becoming sorta good at something.”

Mewtwo (Pokemon) – “I see now that the circumstances of one’s birth are irrelevant; it is what you do with the gift of life that determines who you are.” 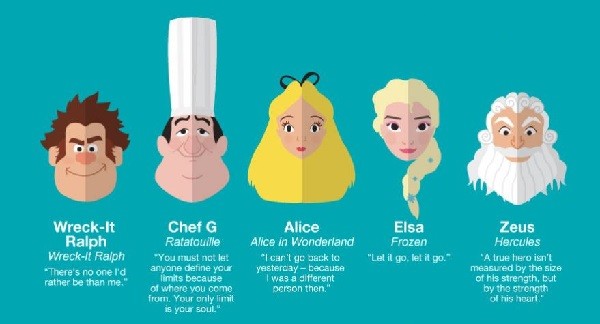 Chef G (Ratatouille) – “You must not let anyone define your limits because of where you come from. Your only limit is your soul.”

Alice (Alice in Wonderland) – “I can’t go back to yesterday – because I was a different person then.”

Zeus (Hercules) – “A true hero isn’t measured by the size of his strength, but by the strength of his heart.”

Jack Skellington (The Nightmare Before Christmas) – “Just because I cannot see it, doesn’t mean I can’t believe it.”

Rafiki (The Lion King) – “Oh yes, the past can hurt. But, you can either run from it of learn from it.”

Elastigirl (The Incredibles) – “Your identity is your most valuable possession. Protect it.”

Phineas (Phineas and Ferb) – “The only thing that is impossible is impossibility.” 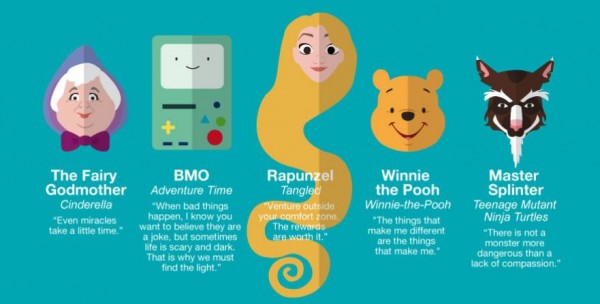 The Fairy Godmother (Cinderalla) – “Even miracles take a little time.”

BMO (Adventure Time) – “When bad things happen, I know you want to believe they are a joke, but sometimes life is scary and dark. That is why we must find the light.”

Rapunzel (Tangled) – “Venture outside your comfort zone. The rewards are worth it.”

Master Splinter (Teenage Mutant Ninja Turtles) – “There is not a monster more dangerous than a lack of compassion.”

Tiana (Princess and the Frog) – “Fairy tales can come true. You gotta make them happen, it all depends on you.”

Quasimodo (The Hunchback of Notre Dame) – “Today is a good day to try.”

Mickey Mouse (Mickey Mouse) – “To laugh at yourself is to love yourself.”

Jack (Samurai Jack) – “The shell of an oyster only hides the pearl inside.”

Master Shifu (Kung Fu Panda) – “Anything is possible when you have inner peace.”

Eeyore (Winnie-the-Pooh) – “A little consideration, a little thought for others, makes all the difference.”

Mary Poppins (Mary Poppins) – “In every job that must be done there is an element of fun.”

Buzz Lightyear (Toy Story) – “To infinity and beyond.”