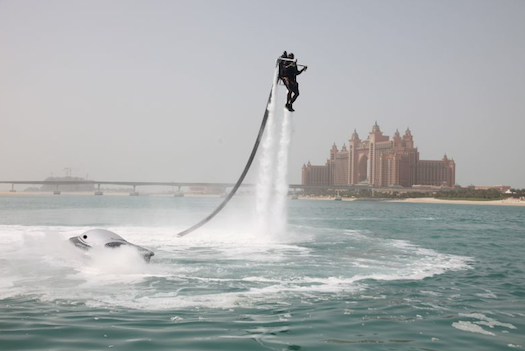 Waterskiing is so passé. This summer, you’ll be able to fly with Raymond Li’s water-powered jetpack, which is going on sale in March. It’s only $99,500!

The JetLev jetpack consists of a lightweight fiberglass backpack connected to a hose that sucks up water. By separating the engine and its fuel from the backpack, Li was able to drastically reduce the backpack’s weight and therefore the amount of thrust needed to get airborne. The device’s thrust-to-weight ratio is three times better than that of a fighter jet, according to New Scientist. 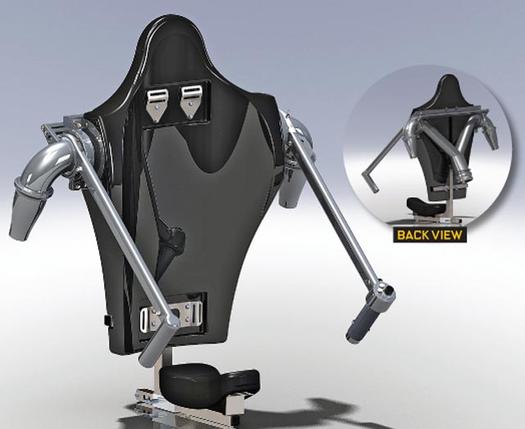 The jetpack produces 430 pounds of thrust, letting its pilot fly forward at 22 mph and reach heights up to 30 feet. “It’s the same reaction force a firefighter experiences when he points a water jet at a fire,” says Li.

But it’s much more easily controlled — the pilot can use hand controls to adjust the water pressure to make precise movements.

The jetpack was on display this week at a boat show in Germany, and it will be available for purchase starting in March, with a $99,500 price tag. New Scientist says initial sales will likely come from resorts and rental agencies. But it could prove useful for water rescues, marine inspections and even peackeeping missions, Li says.

Here is the Jatpack in Action

SUPPORT
Li built the backrest out of fiberglass, glued a thick layer of rubber foam to the front so it wouldn’t sink when he takes off and lands, and attached a four-point racecar-style harness to lock himself in. He also added a crotch belt, a unicycle-like seat and an acrobat’s trapeze for a footrest; all help to keep the operator in optimal flying position.

POWER
Li custom-built the first boat unit out of plywood and fiberglass, but his latest prototype is an extensively modified Jet-Ski with a 215-horsepower engine, which powers an onboard pump attached to it by a direct-drive shaft. The pump connects to a 33-foot-long, four-inch-diameter polyester-and-rubber hose. The production craft, a smaller and lighter pod, will come with a 260hp engine.

THRUST
The Y-shaped assembly on the back, as well as the jet nozzles and the handlebars that steer them, are custom-fabricated aluminum tubes. Li attached the assembly to the harness above the body’s center of gravity so that, in flight, the operator is suspended beneath it. He takes off from the water, hits a trigger on the handgrip to start the pump on the pod behind him, turns the throttle, and two streams of high-velocity water of up to 60 psi lift him as high as 30 feet in the air. To go forward, he pushes down slightly on the handlebars, angling the nozzles to a maximum of 45 degrees.

Here is the inventor flying his creation
[youtube]http://www.youtube.com/watch?v=7-KczCp0OQ4[/youtube]

Top 10 Chinese Phones You Can Buy Instead of iPhone