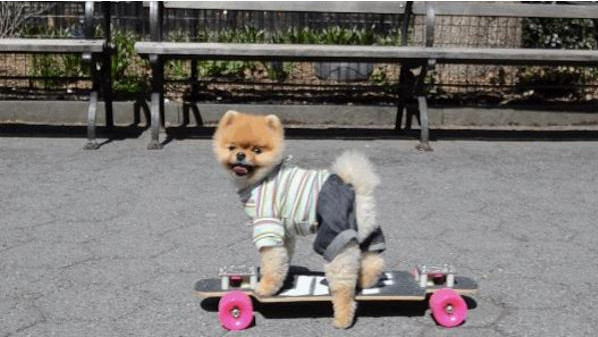 Some dogs are able to do skilful things such as jump through a hoop or fetch a ball, but how many dogs are there that can run on two paws in 6 seconds? A Los Angeles pomeranian named Jiff has been named the world’s fastest dog on two paws with a smashing record of covering 32 feet (10 metres) in 6.56 seconds on his hind legs and 16 feet (5 metres) in 7.76 seconds on his front paws. He is also able to shake hands, bow, ride a skateboard and even stamp his own autograph.

In order to set the new record, Jiff had to complete both distances in under 10 seconds and he therefore practices running both on his hind legs and on his paws daily. After all that practising, he was able to break that record in his first attempt. His achievements are the first to be revealed from the latest Guinness World Records which will be annual released in September.

The talented canine has become a hit sensation in the past year as he boasts starring in a Katy Perry music video, appearing in TV advertisements and even having many fans on Facebook, Instagram, Twitter, and Youtube.

“When Jiff first walked into our offices, we weren’t even sure he was real. He looks like a living, breathing cuddly toy. He might be tiny but he’s got a huge personality, and his wealth of talents can’t be doubted.” Guinness World Records Editor-in-Chief, Craig Glenday said.

“He certainly deserves his place in the new Guinness World Records book, which is particularly special this year because it marks our 60th anniversary.”

“Jiff is just one of the many incredible new record holders in the book, and the first of many special announcements we’ll be making.”

The Guinness World Records book will go on sale on the 11th of September for £20. It will feature augmented reality technology that enables the reader to see record-breakers in action, in 3D.

Jiff’s owners have asked to remain anonymous, so as to prevent themselves from drawing attention away from their celebrity dog.