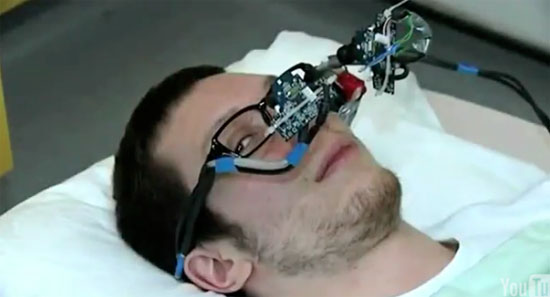 We have seen how pong is played by cars, well now you can play pong with your eyes! Dr. Aldo Faisal from the Department of Computing at Imperial College, U.K along with his team made glasses which can track eye movement in 3D instead of 2D. The basic aim to build such glasses is to allow handicapped to use and learn computer controls easily and this can all be done with eyes only. The movement of eye ball is just like a cursor on your screen; your eyeball movement moves the cursor. Astonishingly these glasses are much more cheaper than the other eye tracking glasses.

To validate this system, the team build a pong game which can be controlled with eyes. Understandably, since the pong game requires easiest movement of eyes so they used this game. The experiment went perfect and they concluded that with in 10 minutes of use of these glasses, a normal person is able to fully master fine cursor control.

This is a great step forward and in future, combination of this type of technology with Google glasses would really spin-off some thing big!

The 21st Century Car: How Has it Changed?