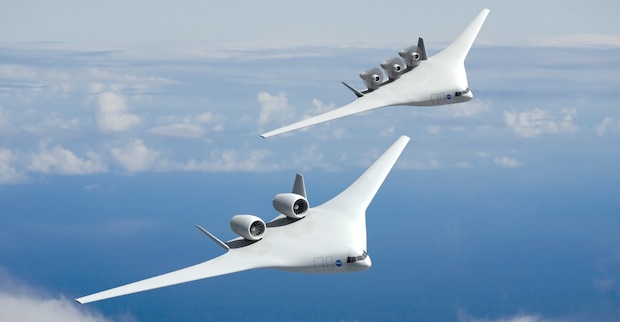 NASA’s contracted three of the biggest names in aircraft design to dream up the kind of airliner we’ll see in 2025, and has just shown the initial concepts. They’re weird, eco-friendly, and wonderful.

NASA’s goal is to invent commercial airliners that can cover the same kind of use cases as current aircraft, but do so with far greater fuel efficiency, less gaseous and noise pollution, and potentially eating up less energy and resources during their fabrication too. This is the sort of long term aeronautical experimentation that NASA funds from time to time, spurring companies to look into long term evolutionary concepts rather than incremental R&D in their usual business areas.

Late in 2010 it contracted Lockheed Martin, Northrop Grumman and Boeing to imagine an aircraft that could fly as soon as 2025, manage 80% of the speed of sound, with a range of 7,000 miles and a payload of 50,000 to 100,000 pounds–either passengers or cargo. Given how long it usually takes to craft an aircraft from scratch, and bearing in mind how many technical hitches the revolutionary Boeing 787 Dreamliner has suffered, these are the sorts of aircraft that these three firms are probably beginning to design for real right about now. Airbus, the European competitor to these U.S. businesses, has already dreamed up a design for 2050, for example.

Boeing’s design (shown above) is the most familiar from this crop. It looks like it’s an evolution of earlier Boeing concepts and even test vehicles. It’s a part-winged, part lifting-body vehicle, with huge internal volume for carrying hundreds of passengers or many tons of cargo, and it has engines mounted on top of the rear body flap so that their noise is much better shielded from the ground. These engines are either conventional turbofans (presumably with efficiency and noise-suppression tech evolved from that used on the Boeing Dreamliner) or the kind of experimental turbo-screw that’s currently a hot-topic research field due to its improved fuel efficiency.

Boeing has many decades of research to draw upon, but will have to persuade passengers to enjoy flying inside a huge room with no windows. 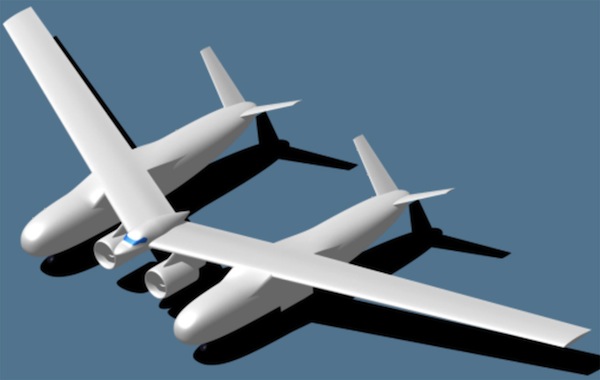 NG has initially gone for a dual-fuselage concept, something that’s been contemplated for some time. The idea is that you can produce a much larger cargo volume using more conventional aircraft designs, and that the engines are partly shielded by the twin bodies which will contain noise pollution better. It has the advantage of allowing passengers to have windows, and could allow for mixed-mode uses with part-cargo, part-passenger flights. The design isn’t even that unexpected, if you consider the White Knight carrier aircraft that’ll be lofting Virgin’s SpaceShipTwo into space.

Lockheed’s concept is the most aesthetically attractive of the three. It’s a development of current aircraft body design, but incorporates unusual aerodynamic advances in the vehicle’s wing and engine. The wings look for the most part like a Dreamliner’s wing and blended vertical winglet, but the winglet extends upwards and folds back in a loop to connect to the aircraft’s tail–this increases the area available for lift. The aircraft has a single giant engine, which will require significant reliability improvements over current turbofan design, but its placement in the tail of the aircraft means it pushes along the centerline and could radiate less noise downward to the ground.

The three concepts will evolve throughout this year as the companies concerned develop and research each project, but there’s one thing we can say straightaway: Beautiful, aren’t they?

How to Convert a VeiwSonic Tablet to a High Performance Device?

Could Nuclear Bomb Be Stolen?