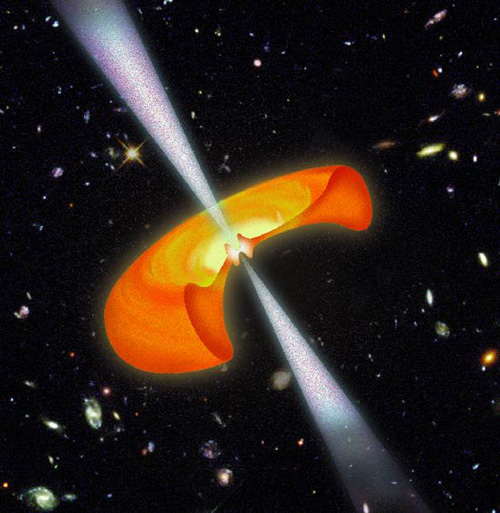 A hypernova explosion, the possible source of powerful gamma-ray bursts, is about 100 times more energetic than a supernova explosion and is thus the most energetic event known in the Universe other than the Big Bang.

Many astronomers today believe that one of the most plausible reasons we have yet to detect intelligent life in the universe is due to the deadly effects of local supernova explosions that wipe out all life in a given region of a galaxy.

While there is, on average, only one supernova per galaxy per century, there is something on the order of 100 billion galaxies in the observable Universe. Taking 10 billion years for the age of the Universe (it’s actually 13.7 billion, but stars didn’t form for the first few hundred million), Dr. Richard Mushotzky of the NASA Goddard Space Flight Center, derived a figure of 1 billion supernovae per year, or 30 supernovae per second in the observable Universe!

Astronomers are hunting for ticking time bombs — stars that are on the track toward becoming supernovas. But they

are unsure about just what causes white dwarf stars to hit that mass limit and explode.

“The question of what causes a Type Ia supernova is one of the great unsolved mysteries in astronomy,” said Rosanne Di Stefano of the Harvard-Smithsonian Center for Astrophysics.

A subset of supernovas called Type Ia supernovas are thought to erupt when a dense, dim star called a white dwarf hits a certain upper limit in mass and explodes. But astronomers are still confused by just what cases white dwarfs to hit that mass limit and explode.

“The question of what causes a Type Ia supernova is one of the great unsolved mysteries in astronomy,” said researcher Rosanne Di Stefano of the Harvard-Smithsonian Center for Astrophysics.

To get to the bottom of the mystery, scientists have been searching for white dwarfs in the stage before they get massive enough to explode, searching for so-called “super-soft” X-rays, which are thought to be created when gas from one star hits another star’s surface and undergoes nuclear fusion. Yet for some reason, scientists have only been able to find a handful of these X-ray sources, where they expected to find hundreds. 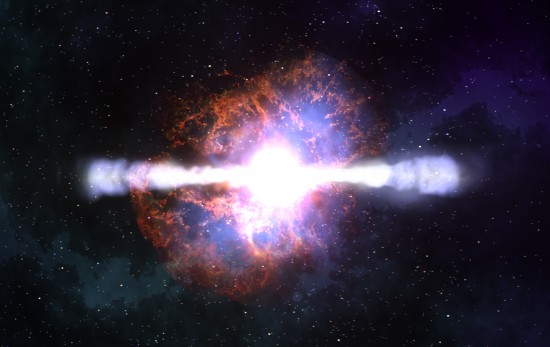 Di Stefano suggests that some process is blocking this light from reaching our telescopes on Earth. Perhaps some other material surrounding the white dwarf absorbs the X-rays after they are emitted so we can’t see them, or that they emit most of their light at wavelengths other than X-rays.

“We must devise new methods to search for the elusive progenitors of Type Ia supernovae,” Di Stefano said.

It was made possible in part to a fortuitously “nearby” burst whose location was distributed to astronomers by the Gamma-ray Burst Coordinates Network (GCN). On March 29, 2003, a burst went off close enough that the follow-up observations were decisive in solving the gamma-ray burst mystery. The optical spectrum of the afterglow was nearly identical to that of supernova SN1998bw. In addition, observations from x-ray satellites showed the same characteristic signature of “shocked” and “heated” oxygen that’s also present in supernovae. Thus, astronomers were able to determine the “afterglow” light of a relatively close gamma-ray burst (located “just” 2 billion light years away) resembled a supernova.

It isn’t known if every hypernova is associated with a GRB. However, astronomers estimate only about one out of 100,000 supernovae produce a hypernova. This works out to about one gamma-ray burst per day, which is in fact what is observed.

What is almost certain is that the core of the star involved in a given hypernova is massive enough to collapse into a black hole (rather than a neutron star). So every GRB detected is also the “birth cry” of a new black hole.