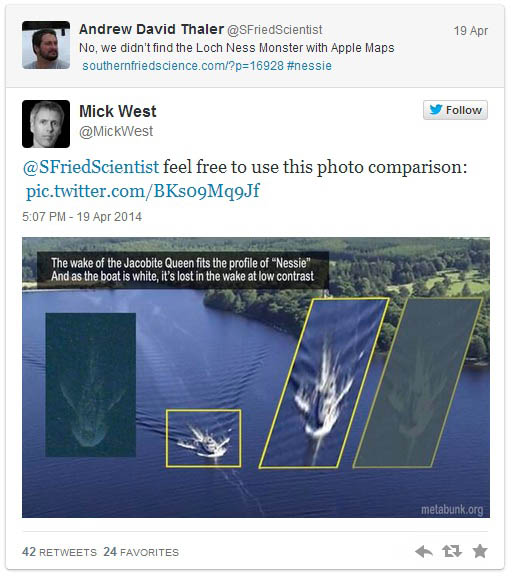 The Loch Ness Moster is a legendary creature supposedly occupying the waters off the coast of Scotland for centuries. In fact, the Loch Ness Monster is thought to be discovered in the 6th century and its popularity rose significantly  in the earlier part of the 20th century.

There has never been any conclusive evidence to suggests the creature  exists and as such it as been written off as a “myth” by the scientific community. However, all that looks to change or at least stir up a debate as a group of Loch Ness enthusiasts claimed they saw the creature via satellite images courtesy of Apple Maps.

Members of the Official Loch Ness Monster Fan Club believe they have the most damning evidence yet to prove that “Nessie” exists after mulling over the image for the past six months.

The exuberant spotters beaming with excitement stated that the creature in the low resolution image has to be “Nessie”.

“We’ve been looking at it for a long time trying to work out exactly what it is,” said Gary Campbell, president of the club, to the Daily Mail. “It looks like a boat wake, but the boat is missing. You can see some boats moored at the shore, but there isn’t one here.”

Campbell told ABC News that the group submitted the image to Scottish Canals, the government that manages the country’s inland waterways.  The agency was not able to confirm the creature’s existence.

“Nobody has been able to explain what it is,” Campbell told ABC. “It’s pretty large, so it’s not a seal or an otter. It’s also not a whale or basking shark as some people claim, because they wouldn’t go in fresh water.”

Mike West of metabunk.org, a site devoted to investigating and debunking mysteries of this nature believes that the image is a boat wake and insists the lack of clarity stems from the low contrasts found in the Apple Maps image.

It seems even with technology centuries after the creature was allegedly sighted that we are no closer to confirming its existence.