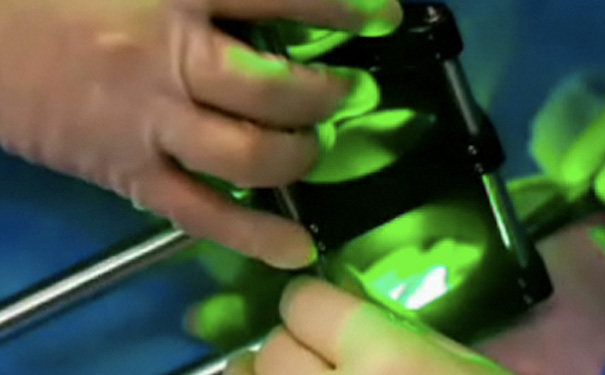 In the near future, wounds may be treated with a flash of light. A process called photochemical tissue bonding can replace conventional stitches, staples and glues in repairing skin wounds and even reconnecting nerves and blood vessels.

Researchers at Massachusetts General Hospital in the US, working with funds from the Air Force Office of Scientific Research, recently completed a pilot study to determine the effectiveness of light bonding compared to traditional stitches. The study involved patients who had skin lesions removed and needed stitches.

The team just submitted the study for publication, according to Dr. Irene Kochevar, a dermatology professor at Harvard and a research fellow at Massachusetts General’s Wellman Center for Photomedicine.

The procedure works by applying a special pink dye to the skin around a wound and zapping it with green light. The dye — called “Rose Bengal,” which is approved for diagnosis of eye damage — absorbs the light, exciting electrons.

The electrons help create chemical bonds between collagen fibers. The collagen then links together across opposite sides of a wound, acting as a tiny seal. These “nanosutures” are more effective than traditional stitches because they’re water-tight, leading to a safer seal and less scar formation, and they don’t require puncturing healthy tissue with a needle and thread. There are no proteins or glues involved, which can cause irritation or inflammation.

What’s more, the process can also be used to reconnect severed nerves and blood vessels, Kochevar says. The Air Force was the impetus for the study, but the technique could be used for injuries in various situations.

“One of the applications for this technology is putting nerves back together, in the hands or legs, for instance. That occurs as a result of traumatic injury. It also happens when you are at a 4th of July picnic and you are cutting hamburgers and you run a knife through your hand,” she said. “So it was developed for the battlefield, but it’s not limited to that.”

As of now, research centers on the molecular processes involved in creating the nanosutures. It’s not ready for field surgery — at least not yet.

Kochevar said the study manuscript has not yet been accepted for publication, but she hopes it will be soon.