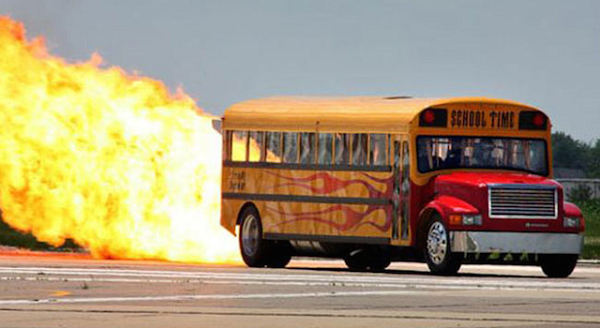 How mad do you get when you arrive late for school because the bus driver drove reeally slow? This man named Paul Stender got so mad once that he decided that he was going to build the fastest school bus, how? – by hooking up a 42,000hp fighter  jet engine to a school bus with the help of his sports and entertainment company, Indy Boys Inc team. Unfortunately and obviously, you will never get to speed off to school in this insane ride because it will never be allowed on roads.

The bus called “School Time” is able to reach a top speed of 367mph and has flames measured to be 80 feet long projecting from its rear to assist it with moving off at high speed. A single run is said to guzzle up 150 gallons of fuel. Aircraft grade materials were also installed on the vehicle to protect it from tearing apart when it takes off down the roadway at high speed. There are also only three other seats in the vehicle, excluding the driver’s seat. This is because the McDonnell F4 Phantom fighter jet’s GE J-79 engine takes up most of the room inside the bus.

“I built the bus for two reasons. The first is to entertain people because, come on, it’s a jet bus.” Mr. Stender said. “The second is to inspire kids to keep away from drugs. We do a lot of displays at schools and we are trying to show kids there’s more to life than sitting in front of computers. It’s important for them to have active hobbies and creative interests to keep busy and keep away from bad influences and drugs.”

Necessities For Selling At Events

How to use Finder to view Folder size