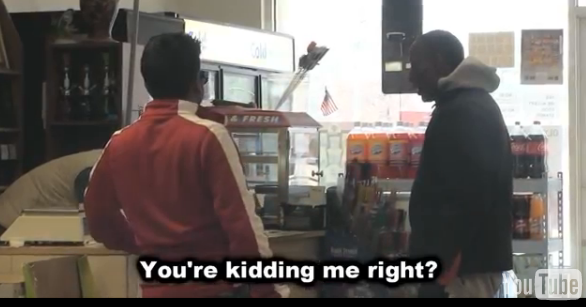 What started out as a prank ended up being one of the most touching and heartwarming viral videos ever.

This is actually the work of famous YouTube prankster, Magic of Rahat, who’s best known for scaring fastfood workers with his headless driver prank. But in this instance, he changes things up and arranged for a non-winning lottery ticket to win $1000 before giving it to a homeless man that he’s been observing for some time.

But what floored him was the selfless response of the homeless man, who right away offered Rahat’s share of the win, insisting that he only needs a portion of the $1000 prize. When Rahat refused, the homeless man was just speechless and you can truly see how he felt at that moment. It’s just impossible not tearing up with the two of them after watching this video… don’t say that we didn’t warn you:

Amazingly enough, Rahat even send up a crowdsourcing fund with the goal of raising $20,000 to help Eric, the homeless man, get back on his feet. And as of this article’s writing, it has already reached $41,015.00. Now this is how viral videos should work in today’s world—towards drawing attention and helping those in need, wouldn’t you agree?

10 Rejection Letters Given to Famous People

Can You Believe That This Parrot is Actually a Human Being?