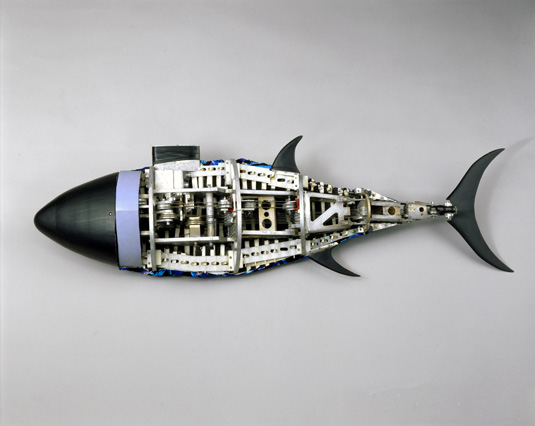 The team of Darmstadt researchers analyzed videos of fish’s motions and then developed a prototype fish robot that duplicated them, and are now testing it using the locomotional patterns of various species of fish in order to refine it and improve its efficiency.

Their fish robot, dubbed “Smoky,” consists of a “skeleton” composed of ten segments enshrouded in an elastic skin that are free to move relative to one another and caused to undergo snaking motions similar to those of fish by waterproof actuators. Including its tail fin, the fish robot, which is a 5:1 scale model of a gilt-head sea bream, is 1.50 meters long.

The researchers hope that use of their fish robot for ship propulsion will help prevent shoreline erosion and the underminings of submarine installations caused by ships’ screws. The fish robot’s “soft” drive action should also prevent the churning up of seabeds and riverbeds and its effects on marine plants and aquatic-animal populations.

Work is also being done in Essex University. Here is a video of their group

How to remove Applications from Mac OS X with AppCleaner