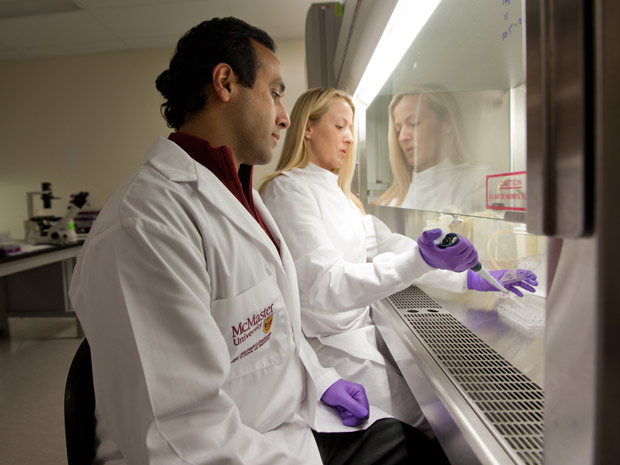 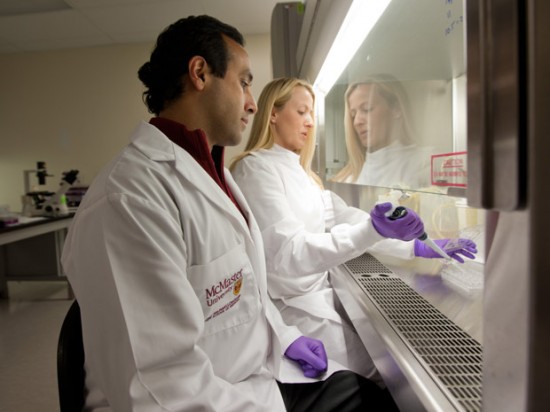 When scientists at Hamilton’s McMaster University noticed that a petri dish full of long, thin skin cells now also had a quite different occupant — distinctive, round blood cells — they suspected they were on to something big.

The researchers’ hunch, it seems, was dead on. As described in the journal Nature yesterday, the team under Dr. Mick Bhatia seized on that chance microscopic sighting and devised a process that transforms skin cells directly into blood, a mind-bending breakthrough that one expert suggests may turn cell biology “upside down.”

The discovery opens the door to creating healthy blood from a mere patch of skin. For leukemia sufferers unable to find a bone-marrow donor — and other patients — the innovation could one day prove life saving.

“This work from Mick Bhatia’s laboratory represents a very important, if not a seminal, contribution,” said Dr. Michael Rudnicki, head of the Stem Cell Network.

Scientists in Japan managed to derive a type of stem cell from skin in groundbreaking work unveiled three years ago. Stem cells are famous for their ability to change into any other type of human cell, holding out the promise of fixing diseased or damaged parts of the body, from injured spinal cords to sick hearts and diabetic pancreases.

Dr. Bhatia’s discovery appears to go a major step beyond that research, eliminating the middle stage of creating those induced pluripotent stem (iPS) cells, and directly reprogramming skin into other types of cell.

Experts say that has a number of advantages. Just deriving stem cells from skin can take five or six months; reprogramming them into other types of cell is another laborious task beyond that. Dr. Bhatia’s lab can get from skin to blood within a few weeks.

More significantly, though, what they produced were adult blood cells, much more useful for clinical applications like transfusing into a cancer patient. Stem cells tend to produce fetal blood cells.

“One of the most important things is, you’re actually making the right cells,” said Dr. Bhatia.

More fundamentally, the findings suggest that even cells that have differentiated into a particular type — be it skin, heart or liver — are not frozen in that state and can be directly reprogrammed to do other things, much like stem cells themselves, experts say.

“It really underscores that the committed cell state is not so definite. We can modulate that and make a cell step sideways into any particular state we want,” said Dr. Rudnicki. “Everything gets turned upside down.”

And the process was not overly complex, said Dr. Cynthia Dunbar of the U.S. National Heart, Lung and Blood Instiute.

“If it’s that simple, it’s really interesting: that a single transcription factor, a single molecular signal in the cell, is able to make that big a difference.”

Dr. Bhatia’s lab is now working on converting skin into cells other than blood, as well. The blood process, though, could eventually prove crucial to the many leukemia patients who linger on waiting lists for bone marrow transplants, where stem cells from the marrow are given to the patient to rebuild a blood system decimated by cancer. Compatible donors are often few and far between.

Instead, patients would be transfused with blood derived from healthy skin cells, bearing the person’s own genetic make-up.

Big hurdles remain, such as “scaling up” the system to produce enough blood, conducting trials and winning regulatory approval. Dr. Bhatia said he hopes that could be achieved in a couple of years. Dr. Dunbar predicted it would be five years at the earliest, and more likely 10 to 15, assuming the lab’s early results are borne out under more testing.

The discovery began as Dr. Bhatia’s team were trying to create iPS cells from skin. Eva Szabo, a post-doctoral student, noticed one day what looked like blood cells in the dish of skin cells, an observation soon borne out by testing.

The team then manipulated three different types of “factors” – proteins that turn on or off genes within cells – until they could intentionally convert the skin into blood “progenitors” or precursors, which in turn become blood cells.

“Instead of … taking an observation and ignoring it, thinking it’s an anomaly, you can try to repeat it,” said Dr. Bhatia. “When you can repeat it, creating round (blood) cells, you start to take it seriously.”

15 Coolest GIF’s You Wouldn’t Have Seen