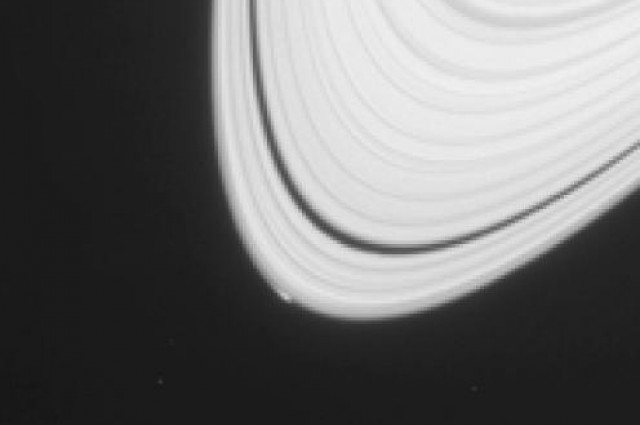 Astronomers say the may have witnessed the formation of a small, icy moon within the rings of Saturn. Scientists believe that this could be the last of Saturn’s naturally formed satellite and as such it presents a unique opportunity to learn about the origin of the planet’s many moons such as Titan and Enceladus.

The study all began one year ago, when a camera on NASSA’s Cassini spacecraft accidentally recorded disturbances in Saturn’s ‘A’ ring. One of these disturbances was discovered to be an arc approximately 1200 kilometers long and 12 kilometers wide which was also 20% brighter than its environment.

Researchers believe the arc and protuberances are caused by the gravitational effects of a nearby object. “We have not seen anything like this before,” Carl Murray from Queen Mary University of London said in a news release. “We may be looking at the act of birth, where this object is just leaving the rings and heading off to be a moon in its own right.”

Saturn has 53 official moons and 9 provisional ones. The moons have always followed the hypothesis of the farther the distance from the planet, the larger they are in size.

“The theory holds that Saturn long ago had a much more massive ring system capable of giving birth to larger moons,” reiterated Murray.  “As the moons formed near the edge, they depleted the rings and evolved, so the ones that formed earliest are the largest and the farthest out.”

It is believed by many to be the last “hurray” in terms of moon creation for Saturn as the rings are possibly too depleted to contribute to such a phenomena any longer. Researchers do not expect the new moon to grow any larger, in fact they believe it is falling apart.

Cassini’s orbit is expected to move closer to the outer edge of Saturn’s  ‘A’ ring in late 2016 which will allow scientists to conduct a more thorough research on the object. The results yielded may offer an insight into how the Earth and other planets were formed.

Self Regulating Cup Gives Your Coffee The Perfect Temperature