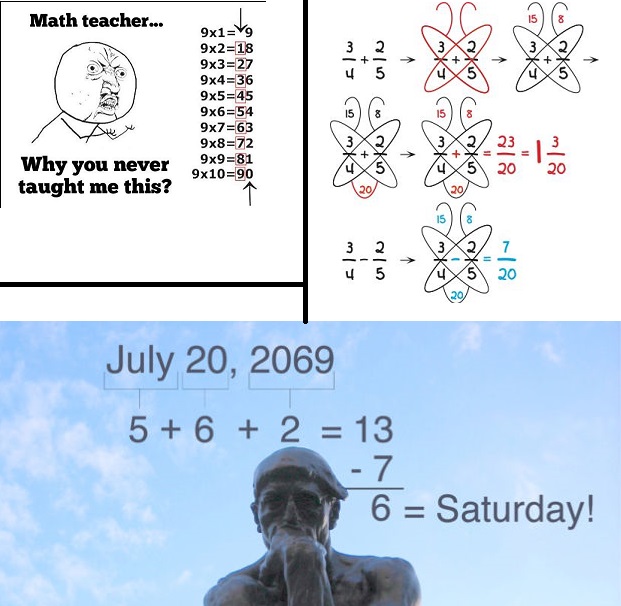 Ascribe the values from 6 to 10 correspondingly on your both hands.

Put the fingers together according to the numbers you want to multiply.

Count the fingers separately on both hands above the fingers in contact and multiply them.

Place the numbers as shown above.

Put the circles on the numbers in cross way.

Now make the fraction in which lower is the number which is the product of lower side and the upper number will be the addition and subtraction of numbers on upper side according to sign ‘+’ or ‘-‘ respectively.

Trick 3.  How to remember table of 9 in easy manner:

First, give the numbering to your fingers starting from the left hand fingers.

Put the finger down of any number which you want to multiply with number 9.

Image Via: The Burlap Bag

Trick 4. Calculation of squaring of numbers from 41 to 49:

Image Via: THE META PICTURE

Take a number for an instance 43.

Similarly, you can use this trick for other numbers from 41 to 49.

Let us take an example of multiplication of 3×4:

Our first number is 3. Draw three vertical lines. And our second number is 4, draw four horizontal lines. Count the number of intersection points that will be your answer.

Second method is calculation of two digit numbers in this way.

Steps are shown in these pictures:

Trick 7. How to write table of 9 very quickly without counting:

Trick 8. Know the day at any date without seeing the calendar:

The formula is : Month Code + Date + Year Code = Day of Week Code. This is given by Grey Matters: Mental Gym .