Indiana Jones found success with little more than a bullwhip and a fedora. These days however, if you want to make your mark as an archaeologist, a bit of space technology works wonders.

More than 1,000 burial sites were also discovered thanks to infra-red technology capable of probing beneath the desert sands from 450 miles above the Earth.

Pyramid of Djoser: Many more are thought to be buried underground. The cameras on the satellites are so powerful that they can precisely image objects on Earth that are less than one meter in diameter
Astounded researchers on the ground have already confirmed that two of the pyramids exist – and they believe there are thousands more unknown sites in the region.

NASA-funded archaeologist Sarah Parcak said: ‘I couldn’t believe we could locate so many sites. To excavate a pyramid is the dream of every archaeologist.’

The finds are hugely significant. Until the latest discoveries there were thought to have been almost 140 pyramids across Egypt.

But experts have long argued that there must be many more which remain undiscovered, buried by the sands of time. Dr Parcak, from the University of Alabama at Birmingham, analyzed images from satellites equipped with cameras so powerful they can zoom in on objects less than three feet in diameter on the Earth’s surface. 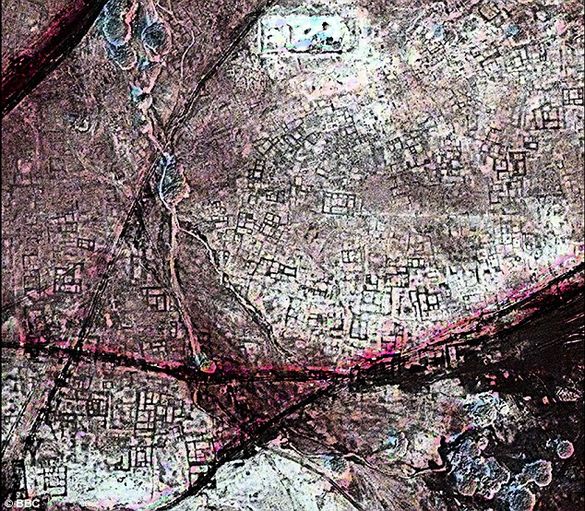 Ancient street map: A satellite image shows Tanis to be a city littered with underground tombs. Buildings in ancient Egypt were constructed out of mud brick – the material is dense, allowing satellites orbiting above Earth to photograph the outlines of structures invisible to the human eye 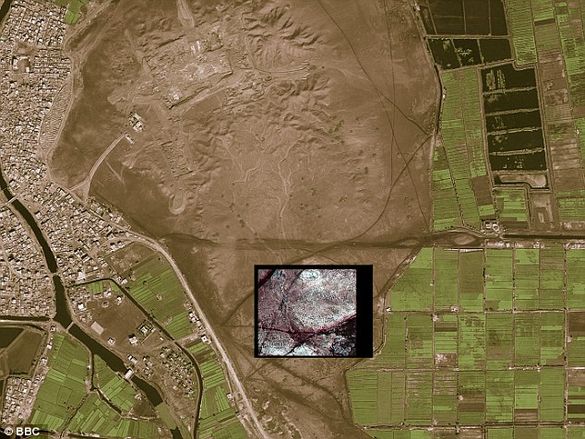 Hidden history: This image of Tanis shows the difference between what the naked eye can see and the underground details that the high-powered satellite camera can pick up
Dr Parcak told the BBC: ‘I could see the data as it was emerging, but for me the “a-ha” moment was when I could step back and look at everything that we’d found.’
The mud bricks used by ancient Egyptians are much denser than the sand and soil that surrounds them, allowing the shapes of homes, temples, tombs and other structures built thousands of years ago to be seen by satellites orbiting 435miles above Earth to photograph the outlines of structures invisible to the human eye.

The cameras on the satellites are so powerful that they can precisely image objects on Earth that are less than one meter in diameter.

The researchers’ findings are a major boost to the relatively new science of space archaeology.

Their most promising excavations are taking place in Tanis, where they are uncovering a 3,000-year-old house.

Excitingly, the outline of the house exactly matches the shape seen on the satellite images.

Two pyramids at Saqqara – the burial ground for the ancient capital of Memphis – have already been confirmed by excavations and the site is being hailed as one of the most important in Egyptian archaeology. The oldest pyramids ever discovered were built in Saqqara around 2,600BC. 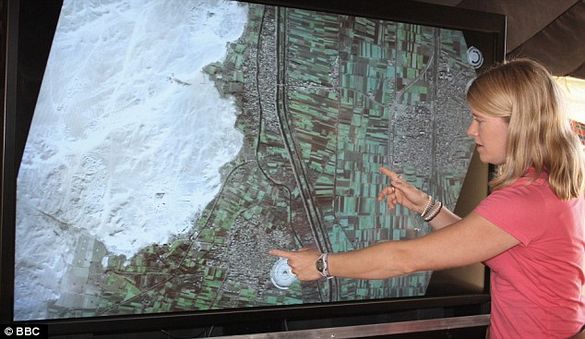 Only the beginning: Archaeologist Dr Sarah Parcak points out the site of a buried pyramid on a satellite image 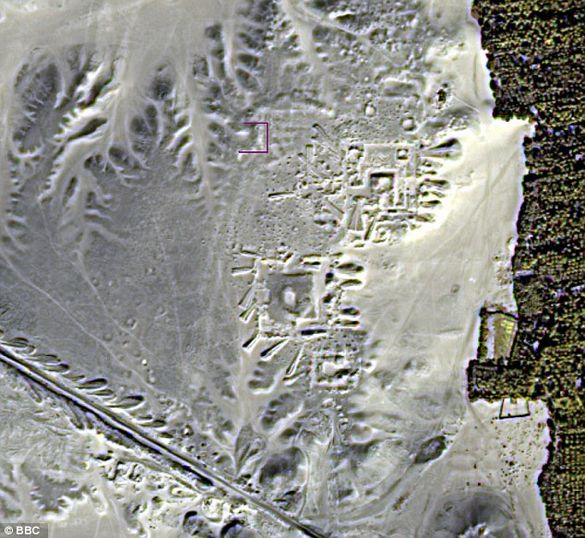 The amazing satellite images have revealed pyramids and ancient homes
The camera’s high level of accuracy has impressed the Egyptian government, which now plans to use the technology to identify and protect its colossal heritage in the future.

Dr Parcak believes that there are many more buildings buried deeper than those already spotted, the most likely location being under the banks of the River Nile.

She said: ‘These are just the sites close to the surface. There are many thousands of additional sites that the Nile has covered over with silt.

‘This is just the beginning of this kind of work.’

A dig at the historical site Tanis, the hiding place of the Ark of the Covenant in the 1981 Indiana Jones blockbuster Raiders of the Lost Ark, revealed a 3,000-year-old house that matched its satellite image almost perfectly.

Dr Parcak believes these finds could be the first of many.

Digging deep: The archaeologist’s most promising excavations are taking place in the ancient city of Tanis
She told the BBC: ‘It just shows us how easy it is to underestimate both the size and scale of past human settlements.

‘These are just the sites [close to] the surface. There are many thousands of additional sites that the Nile has covered over with silt. This is just the beginning of this kind of work.’

She said the technology could be used to monitor the looting of antiquities, as well as to engage young people around the world in science and help archaeologists in their quest to uncover the secrets of the past.

The archaeologist said, ‘We have to think bigger and that’s what the satellites allow us to do. Indiana Jones is old school. We’ve moved on from Indy, sorry Harrison Ford.’

A hidden chamber unseen for 4,500 years may have been discovered inside the Great Pyramid of Giza. A robotic probe designed by British engineers found hieroglyphs inside a tunnel that leads from the pyramid’s Queen’s chamber, New Scientist magazine reports. Cameras have also sent back images of a stone door which it is thought could lead to a hidden chamber.

Dr Parcak and her team’s findings form the basis of the documentary Egypt’s Lost Cities, which airs on BBC1 on May 30.