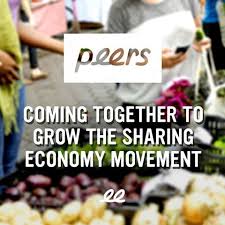 Peers.org is a recently launched nonprofit labels itself a ‘grassroots organization supporting the sharing economy movement’. What exactly is the sharing economy, heralded by Peers as nothing less than the new economy for the 21st century? Though their website doesn’t really clarify, many of the businesses listed as partners – airbnb, lyft, Sidecar, Vayable, taskrabbit and others – are companies who enable individuals to rent or sell goods and services previously only available through professionals and companies.

It seems the so called sharing economy involves temporarily providing one’s time or possession in exchange for money. Now, while such an idea may be beneficial to both buyers and sellers, to call it sharing is an egregious misuse of this word. When you stay at an established hotel or a B&B you are not sharing the room with the owner – you are paying to gain temporary access to it – and the same applies to transactions with private persons.

‘Sharing’ is the continuous joint or alternating use of a resource. When you are paying to get one time or access to a room, a car or whatever you are not sharing – you are merely a paying customer. Otherwise you’d have to call any economic transaction sharing.

Indeed, some of the attempts to explain the sharing economy end up maintaining that every time money changes hands this is sharing – for example the discussion in the comments for this Salon article where one person (it is unclear if they are being facetious) describes apartment rental as sharing because ‘the landlord shares his apartment with you and you in turn share your income with him’. If this is the new economy it looks an awful lot like the old one.

Full disclosure: I am an airbnb fan and have used the service in the past with positive results. I also believe in that disrupting established industries is a good idea, at least under some circumstances. But Peers.org strikes me as problematic on many levels, not just because it tries to perpetuate a buzzword that has no economic or logical basis.

The ‘grass roots’ organization seems to be funded by people who have a stake in privately held companies and have a vested interest in the growing popularity of peer to peer transactions. It is unclear if peers.org individual members have any say in the running of the organization (I asked peers.org but have not received a response, will update the story if I do get one). Given the lack of transparency as to who are the backers and the manner in which their funds are allocated – a lack of transparency that is not exactly in keeping with the sharing ethos – I doubt it.

Perhaps I am being overly cynical, but this strategy of utilizing social media to create a sense that supporters might have an actual say, when in reality they have none is a page from President Obama’s digital playbook – many of us were disheartened to see his innovative use of social media turning out to be a strategy for reelection (or for gaining support for major initiatives) rather than a platform for facilitating real discussion and influence between a politician and his supporters.

In their quest to disrupt established industries, companies like airbnb and lyft are encountering regulative and legal challenges. That is to be expected, and these companies would be only prudent to seek lobbying efforts to prevent being run over. But rather then turning their users into unwitting peons in this battle between conglomerates and upstarts airbnb et al.’s  first priority should be to make sure their users are protected. For now it seems like it is those individual users who are paying the heaviest price – including arrests and financial uncertainty.  If peers.org steps up to guarantee that the actual peers (that is normal users rather than investors or company officials) do not become collateral damage it might prove to be more than a snazzy website and a covert lobbying machine.

Color Preference by Gender & What it Tells About You