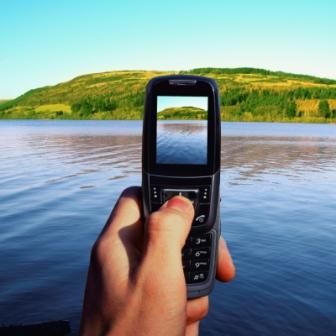 The great megapixel race may finally be slowing down in digital cameras, but it’s picking up steam in cell phones.In digital photography, the term “pixel” refers to the tiny dots that make up a photograph. The more pixels a photograph has, the higher its image resolution. A megapixel is equal to one million pixels.Both Samsung’s Pixon 12 and Sony Ericsson’s Satio cell phones take 12-megapixel photos – meaning you can now buy cell phones with greater resolution than Canon’s top-of-the-line point-and-shoot digital cameras.

If this sounds a little crazy, that’s because it is, experts say. Few people need 12 megapixels, especially in a cell phone camera. The megapixel race has grown out of the megapixel myth, the false notion that a camera with higher resolution is always better. Manufacturers and retailers, eager to convince consumers that they need the latest camera and phone models, have pushed this faulty idea hard.”By itself, the number of megapixels doesn’t tell you anything about the quality of the image produced,” said Steve Berardi, founder of PhotoNaturalist.net. “Sure, it will tell you how big the image is, but bigger doesn’t always mean better quality.”

For the average shutterbug, five or six megapixels is probably plenty of resolution. Beyond this level, various other camera characteristics, such as the size of the image sensor and optics quality, are more important than raw megapixels.Canon acknowledged this in digital cameras when it released the latest entry in its Powershot series in 2009. The company’s PowerShot G11 has only a 10-megapixel image sensor, which is nearly 5 megapixels less than the previous model, the PowerShot G10. Despite the lower megapixel count, many photographers say the G11 takes cleaner and less grainy images compared to the G10.

The megapixel myth holds even less water for cell phones than it does for stand-alone digital cameras like the G11. Most folks, after all, aren’t making big prints out of their cell-phone photos or enlarging small sections – activities for which ultra-high resolution comes in handy.As with the early days of digital cameras, the quality of cell phone photos is improving. But higher megapixel counts are likely not the main reason why.It’s probably because they’re using better image sensors, or just larger ones.

So next time when u buy a mobile phone, dont decide on the megapixels of the camera alone, keep an eye on the CCD quality and the lens size too. Just a small tip from RealityPod. Hope that helps. Stay Tuned!